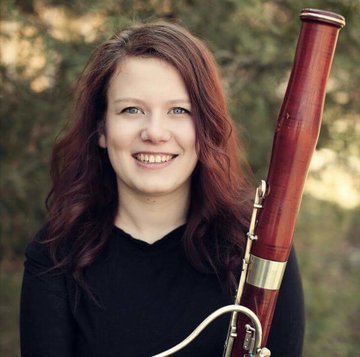 Co-principal Bassoon with Southbank Sinfonia. A recent graduate of Guildhall School of Music and Drama and the Royal Academy of Music.
Bassoonist
Egham
Public liability insurance of £10 million
Verified profile

Ana Docolin has recently graduated from the Guildhall School of Music and Drama, having previously studied at the Royal Academy of Music. Throughout her studies she was generously supported by the Phyllis Little Memorial Trust, the Leverhulme Trust, Sir George Iacobescu and Christof Group. She studied with John Orford, Dan Jemison, Helen Simons, Peter Whelan and Miriam Gussek, A keen orchestral player, Ana has performed in side by side projects with the London Symphony Orchestra at the Barbican Centre and at the Trafalgar Square Open Air Concert. She has also played with Targu Mures Philharmonic Orchestra, Guildhall Symphony Orchestra, Royal Academy of Music Symphony Orchestra, Orchestra Nova, London Firebird Orchestra, Chipping Campden Festival Orchestra Academy and many more. As a chamber musician she has performed at venues across London including the Barbican Hall as part of the Sound Unbound Festival. Ana enjoyed working with artists such as Sir Simon Rattle, Semyon Bychkov, Nicola Benedetti, Vladimir Jurowski, Pablo Herras Cassado, Imogen Cooper, Marin Alsop, Sir Mark Elder, Benjamin Grosvenor and many more. She has also toured India with the Shillong Chamber Choir and the European Concert Orchestra and China with the Ulysses Symphony Orchestra. Ana has been invited to join the Southbank Sinfonia from January 2018. Ana also holds an interested in education. As well as teaching the bassoon privately and depping at Center for Young Musicians, she has led workshops in a number of primary schools in London such as Greenleaf Primary and Prior Weston.

MB
Michael B
3 years ago

Ana arrived early, played beautifully and was a joy to have in the Orchestra. A young lady with a very bright future.

Really nice young lady, very helpful. Great bassoonist and good support to my other 2 bassoonists. Hope to have her play for us again.