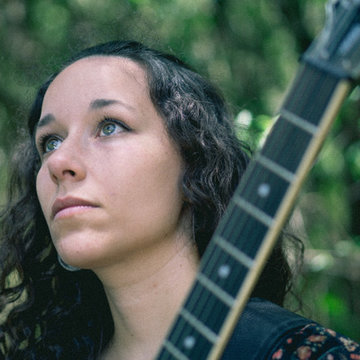 Guitarrist with a guitar degree and experience in jazz music with composition and arrangement skills to meet the clients expectations.
Guitarist
Lisboa
Public liability insurance of £10 million

Born in Algarve, in the south of Portugal Ana started her musical studies at the age of fifteen. Throughout her career, she contacted with various musical styles, such as jazz, fusion, fado, bossa nova, rock, pop, and others and had a lot of stage experience. She graduated in classical guitar by Escola Superior de Música de Lisboa in the class of professor António Gonçalves and did a year of Erasmus in Spain in the class of professor Margarita Escarpa. After her degree she started to manage her own projects with classical guitar, electric guitar, and with other musicians and she had a lot of concerts in Portugal and abroad. She received a prize in the International Guitar Competition of Golegã and presented herself as soloist in several recitals as well as in the Guitar International Festival of Lagoa. Currently she is studying jazz, she teaches in Academia de Música de Telheiras and keeps a very active musical live through her projects and temporary collaborations with various musicians.

ENG Your concert in the "Restaurante da Mena" showed your simplicity and simpathy. Looking at you with your guitar made me happy with the choice of having you there making music and the audience was very expectant. With a touch in your strings you seduced all the audience and the way you played just showed that you have a huge passion for what you do and you do succed. It really was a remarkable night. PT A tua presença no restaurante da Mena veio realçar a tua simplicidade e simpatia .Ver-te com a tua guitarra encheu-me de orgulho e todo o ambiente ficou expectante. Com um toque de cordas seduziste toda a plateia. Não se esperaria outra coisa: a maneira de como tocas as notas musicais, a maneira de como estás em palco demonstra a grande paixão pelo que fazes e como o fazes bem!!! Foi realmente uma noite memorável.