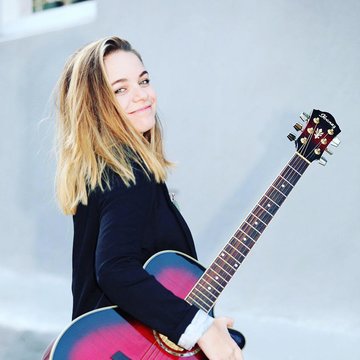 Check availability and get a free quote now - no commitment to book
From£280
Watch & Listen
About Amy
Reviews
Home page
Amy Tjasink
Like Amy?
Watch & Listen
1-3 of 5 videos

Amy Tjasink is a singer/songwriter based in London. The 25 year old songstress is best known for her up-beat acoustic sets on guitar.
3 of 6 photos
Singer
Borehamwood

The personification of creativity, talent, self-reliance and passion. Amy Tjasink is a young singer/songwriter hailing from Cape Town, South Africa. She has been playing guitar, singing and writing music since the age of 14, and since then, has worked at a steady career both in South Africa & Internationally. Amy is best known for her strong song writing abilities into any genre’ and her way of combining words and character to tell a story and simultaneously entertain. “I have so many stories to tell, melodies to sing and feelings to create, and this gives me an endless flow of inspiration and creativity”. Amy worked as Music Director on board cruise ships in Australia for 2 years, where she was lucky to play with and be influenced by musicians from all over the world, equipping her with her versatility in song-writing. Recently, Amy also spent time touring in the Middle East, and was surprised with the humbling support from the locals in Muscat. However, though internationally, Amy has been touring and playing for 5 years, it was only recently that she had the confidence to make a bold leap for the stars in her home country of South Africa. Amy broke into the Cape Town Scene in August 2016 with the release of her debut EP, titled “Average Jane” – a collection of country/folk pop songs written in her years whilst studying music. Following this release, many doors opened to her, as she became recognized for both her song-writing skills and performance skills as a guitar player and vocalist. Before long, Amy was approached by a variety of bands and organizations requesting her input into song-writing and campaign writing, with notable songs being Get Wild – El Mukuka Remix as well as Drip Drop – a campaign song written to aid in the awareness of the current water crisis in Cape Town. Amy’s individual writing style has taken a turn to beach rock & light styled pop music, yet she remains determined to write within as many genre’s as possible to develop her skills further and ultimately fulfill her dream of not only writing for herself, but for other artists too. For the last 18 months, Amy has been working on the recording and production of her debut album, entitled “Simplify Me” which is due to be released in April this year. Having studied Music in Cape Town, Amy had the opportunity to meet and connect with fellow young musicians in the ‘Mother City’, where she managed to source the members of her full band. Along with their influences in session music, they created a sound truly unique to Amy’s writing style – a sound that they have now proudly immortalized with “Simplify Me”. “I want to bring the focus away from electronic production, and pay tribute to the art of live instrumentation, and concentrate on the music. “Simplify Me” is a lesson I have not only learned in life, but also in music. The art of simplification is what I believe leads to true happiness, I have always lived my life this way, and as soon as I started applying this to my music, my entire sound fell into place” – Says Amy Amy’s debut album reflects a more mature side to Amy’s song writing; however, the songs still have the sassy, flirty and fun aspect, and the album slightly steers away from Amy’s previous style of country – pop love songs. Brewed with a few more mature ingredients, this album highlights issues within the music industry, personal struggles, as well as some simply fun songs full of attitude. You can hear the “holiday” influence in the music , with a lot of off-beat reggae styled guitar and drums, in contrast to which the darker tracks pay tribute to the electric guitar. By simplifying production and focusing strongly on a live band, Amy and her producer Jonny Dose’ have managed to craft something truly special and unique. “Simplify Me” takes you on a journey of emotions. “I want to evoke feelings with my music, I want people to remember how it feels to truly FEEL the music, I want the songs to take them somewhere else, and I want to highlight the importance of the music” Amy’s album is now availabel on all online platforms along with her debut single "Ponta DÓuro Follow Amy on Instagram & join her daily journey as she documents her road to success:

Musical Coordinator plays a huge part in the onboard entertainment program. Amy has proven to be a good Manager and works well with the Musicians and sub entertainment departments alike. Amy is very passionate about her music and the onboard program, this shows in all of her performances and positive feedback from guests. During this contract it was addressed with Amy that she needed to work on better communication with fellow Musicians, since then there have been no issues as she really took this onboard. This contract, Amy put together a full Swing Theatre Show along side Piano Bar Entertainer Anthony, this show has been very successful and gets better by the cruise. Amy should be very proud of herself. It has been a pleasure working with Amy again and I wish her all the best for a bright future ahead.

Amy is definately a great Music Coordinator. This contract Amy has implemented themed sets and also put together a joint show with the pianist called LOVE Lounge which was very successful. Amy coaches and leads not only the musicians but also the cast and ents team. Amy's scheduling of the musicians in the F&E and Good Times are fantastic, her is assistance is much appreciated. Where ever addtional activities need to be covered, Amy is the first person to put her hand up. Amy is destined for success as she is a very talented young lady, she remains motivated at all times and passionate about music. It has been an absolute pleasure working with Amy and I can't wait to her rise to the top in the industry. All the the best and enjoy your vacation.

Thanks so much you were truly awesome!!! We got so many good remarks about your singing, just wish we could have heard more of it!!