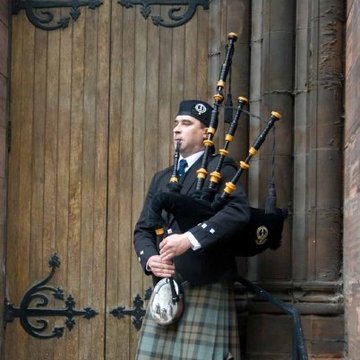 Highland piper with 30 years of professional piping experience playing as a military and civilian piper all over the world.

I learnt my piping from my father and then my main tutor another Highlander from Lochaber and a former Scots Guards' piper who was British Army Pipe Major qualified. Both my father and tutor were Gaelic speakers and steeped in the Highland piping tradition. I have been therefore very lucky to have experienced a traditional way of learning Highland piping. There have been pipers in my family going back for centuries and some of these were Seaforth Highlanders. I have also been a member of an army pipe band and have played for many army ceremonies and events including the Edinburgh Military Tattoo, military parades, Remembrance Sunday ceremonies, Mess Dinners, roll calls etc. I have also played for members of the Royal family, British Prime Ministers and other VIPs both as a military and civilian piper. I have played at events throughout the world for British Ambassadors and the expat community and other events all over Britain. My experience also includes live television and radio broadcasts as well as pre-record programming.

Brilliant thank you Alistair! Professional, punctual and so helpful with details and ideas. You made our night a huge success and so special. Thank you!

The family were very happy with this part of their service. A poignant performance for a musical man. Thank you for arranging our booking at such short notice. Sally

Jimmy, Alistairs dad played at a family memorial service, He was lovely, arrived well before time so we could sort out where he was going to play, played inside and outside the church. Helped us with the choice of music and made the day memorable and personal. Thankyou !

Alistair played at my daughters wedding and he was brilliant. He was friendly, approachable and nothing was too much trouble for him. It was about 30 degrees and Alistair stood in the boiling sun without complaint. His playing was great and he played tunes we asked him too. He really did make our day extra special. So many of our guests commented on how much they enjoyed him and he was their first experience of a piper. So glad we hired him and I would wholeheartedly recommend him .