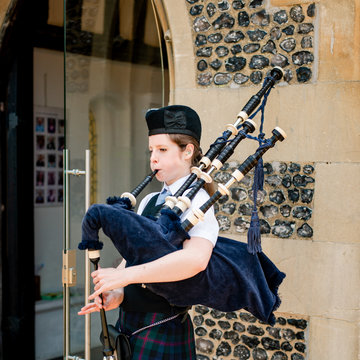 I grew up in Oban, on the West coast of Scotland where I found a love for the bagpipes as a young toddler. This lead to me starting piping from the age of 10. I began taking chanter lessons a few years prior to this, learning from one of the best. I then attained a piping scholarship for Strathallan School and throughout my time there, I performed with the band, in trios and as a soloist. In my final 2 years at Strathallan School, I was given the role of Pipe Major, leading the band through many competitions. I now live in London where I continue to play the bagpipes and work as an actor. I offer my services at weddings, funerals and Burns Nights as well as other events. I recently joined the rock band playing for a production of American Idiot the musical where I had to slightly rock up my piping uniform and approach. As well as playing the Highland bagpipes, I also have a set of smallpipes if you'd like a few quieter Scottish tunes to be played during the night, or alongside other instruments. My aim is to make your event as personalised as possible.

PI
Priscilla I
2 years ago

Alice delivered a very professional performance. A young musician with a high standard. Highly recommend for any occasion that you might need a bagpiper for.

KB
Kerry B
4 years ago

PB
Paul B
5 years ago, for a Funeral / Memorial service in Byfleet

Alice, thanks for making our remembrance service so amazing. Everybody said you were the star of the service.

Alice really did us proud when she was our piper for our annual Remembrance Sunday Parade in Godalming. Having her with us just added that extra gravitas to the event and everyone commented on how lovely it was to hear her playing. Her repertoire was vast and Alice was a consummate professional. Would definitely recommend her; she will enhance any event you plan to hold.