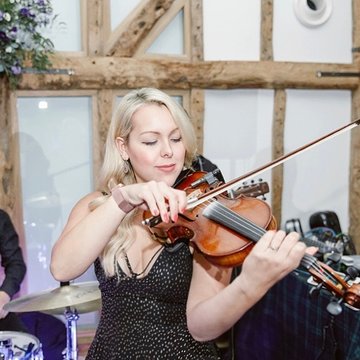 Ali Barnes is an experienced performer specialising in Folk & Traditional music, with a vast repertoire of Irish, Scottish and English tunes at her hand. As a full-time, freelance musician, Ali has spent the last 12 years performing solo and with numerous Ceilidh and Irish bands in a range of venues and settings, from village halls to the Dorchester Hotel. Including TV appearences on: E4’s “Made In Chelsea” (twice), BBC1’s “This Week”, ITV’s “TOWIE”, BBC2’s “Great British Menu” and performing for celebrities including David Mitchell, Jeremy Clarkson, Emma Watson, Charlie Boorman, Trinny Woodall, Noel Gallagher, Kirsty Alsop and Theo Wallcot amoung others. As a fiddle player she has performed across the world in counties including Malta (three times), Florida, Italy, Portugal, Sweden and France, and as a fiddler and singer she has appeared at many festivals including Sidmouth Folkweek, Bromyard Folk Festival, Banbury Folk Festival, Enfield Town Show, Chippenham Folk Festival, Alexandra Park Summerfest, Wimborne Folk Festival, Crediton Folk Weekend and Beachbreak Live. Ali runs the well renowned ceilidh band 'Licence to Ceilidh' who she regularly performs with as a Fiddle player and also Caller, but often performs with other ceilidh bands as well. She provides solo traditional music for drinks receptions at weddings and events and regularly performs as a duo with her husband Philippe Barnes. Ali is also a regular on the London Irish session scene and is often booked at pubs across London. Full TV Credits: ITV 'Sanditon' E4 'Made in Chelsea': S12 Christmas Special E4 'Made in Chelsea': S3 BBC1 'This Week' BBC2 'Great British Menu': S2 Finale ITV 'This Time Next Year': S3 ITV 'Loose Women' ITV 'TOWIE'

It's usually not a problem and i'm happy to be flexible, if it was quite a big change it would just depend on the date, the location and details like that, also how much advance warning I have :-)

I have a carefully crafted Celtic music playlist I can pop in if time once set-up and during a break - unless just playing acoustically.

Yes, usually the solo fiddle is done acoustically, particularly for a ceremony. But I also have a small speaker set-up for events that require it and a battery amp for playing outside.

Yes no problem at all!

Standard Prices
Packages
Fiddle to play with band
Fiddler player to play for a band along with other musicians
£175
Wedding ceremony
This includes music before the service begins, music during the signing of the register, and music as guests leave.
£180
Drinks reception
Two performances of up to 45 mins each during your drinks reception
£250
NEW!Virtual services
Zoom Performance by Celtic Duo
We'll provide a live performance over Zoom for your party, conference or meeting. Up to 30minutes performance time. Upbeat Irish and Scottish music from a Fiddle & Guitar duo, all instrumental.
£250
Ali

SK
Stefanie K
4 years ago, for a Corporate event in London

Hi Ali and the Trad for London musicians, I just wanted to send over a quick thank you to the trio you provided for our cocktail reception last Friday. The music was just right for our event and really captured the vibe that we were going for, i'd be happy to recommend you to anyone in the future. Best wishes

TJ
Toria J
5 years ago, for a Wedding in Fosscross Ln

Hello Scotch on the Rocks. You guys played our wedding at Cripps Barn at the weekend and my wife (!) and I would just like to say that you were absolutely outstanding and exactly what we were looking for. We had lots of nervous pals from overseas who had never ceilidh danced before and so many of them came up afterwards and said how much fun they had. One even said she needed to find a Scottish guy to marry. You were brilliant and really made the occasion for us. We also weren’t sure about booking a ceilidh band so far from Scotland but felt we were in great hands.

Fiddlers in the UK