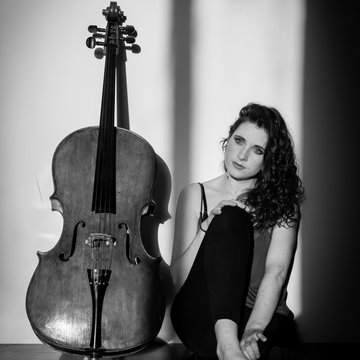 Alexandra Fletcher began playing the cello at the age of eight, studying at the New England Conservatory of Music with Laura Blustein and Colin Carr, and at the Royal Academy of Music with Robert Max, Philip Sheppard, and later Mats Lidstrom, She completed postgraduate studies at the Guildhall School of Music and Drama under Adrian Brendel and Tim Lowe, graduating with distinction. Alexandra is a versatile cellist. She particularly enjoys chamber music, and has performed at a variety of venues including the Wigmore Hall. She is an experienced performer of contemporary music, premiering several new works as a soloist and ensemble player, including John McCabe’s Cello Sonata and pieces by Dani Howard and Amy Luyendijk as soloist with the London City Orchestra. She also plays as a freelance orchestral cellist with many of London's ensembles. She has a thriving private teaching studio, and coaches privately and on residential courses. Alexandra has won a range of awards all over the UK, and has performed as a soloist with a number of orchestras, recently collaborating with London City Philharmonic and the Canterbury Music Makers. She will be giving the first UK performance of Marie Jaëll’s Cello Concerto, written in 1882, with London City Orchestra later this year.

Standard Prices
All prices include:Skype consultation, backing tracks, up to 3 new songs of your choice, access to a rehearsal if required.
NEW!Virtual services
Personalised Music Message
Book me to create a unique music video for you to send to a friend as a gift. This could be a birthday message, first dance song for a wedding anniversary, or just your friend's favourite song to cheer them up.
£15

Alexandra is meticulous, reliable and a wonderful cellist! She plays with immense subtlety, spontaneity and warmth of feeling. A pleasure to work with!

What a performance! You were magnificent and the feedback from the orchestra and audience was tremendous!

Alexandra is very talented and experienced which made the recording session easier. She makes a gorgeous sound with her cello and it is always nice to work with her. I would highly recommend her.