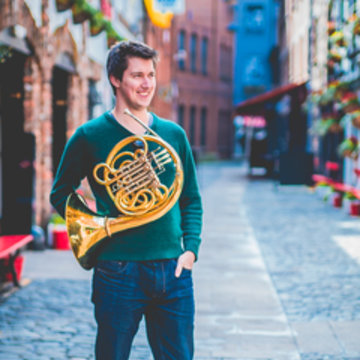 Alexander is a french horn player and teacher based in Edinburgh

Alexander is a Northern Irish horn player and teacher. In 2015, he graduated with a MMus in Orchestral performance from the Royal Welsh College of Music and Drama, where he studied with Tim Thorpe, Angus west and Anneke Scott. he is currently working as a Freelance Musician and Teacher with Berkshire Maestros Music Service. Alexander first began playing the horn under the tutelage of Jennifer Leslie before studying for 4 years with Paul Klein, principal horn with the Ulster Orchestra. In 2013 Alexander graduated from the Queen's University Belfast and subsequently began his postgraduate study at the Royal Welsh College of Music and Drama. As well as his musical studies at Queen’s Alexander is a member of several musical ensembles and has appeared as both conductor & soloist with Queen's University Symphony Orchestra. A keen orchestral player, he has played with the City of Belfast Youth Orchestra for four years, appearing as a soloist in Robert Schumann’s Konzertstück both in Belfast and France. Also Alexander has been a member of the Ulster Youth Orchestra and last year performed in the BBC Proms under JoAnn Falletta. Outside of his studies at Queens, Alexander has been involved with the Queen’s University Symphony Orchestra, both as a conductor, performing Dvorak’s 9th Symphony and as a soloist playing Mozart’s Horn Concerto in E flat K.447. Since beginning his study at the Royal Welsh College of music, Alexander has appeared with several of the college’s ensembles, including the RWCMD Symphony Orchestra, Chamber Orchestra Symphonic Brass ensemble and period work group Badinerie. He has also benefitted from Master classes from Richard Bissil, David Pyatt, London Brass, Mnozil brass and the Mariinsky Brass Ensemble. Alexander's study is supported by the EMI music sound foundation. In 2014, Alexander was awarded a Help Musicians UK Postgraduate Award, for which he is extremely grateful.

Albert Herring 2015 'The students of the RWCMD Chamber Orchestra played with as much skill and pazazz as their colleagues sang...'

'Alex performed a lovely last post for our remembrance service'

French Horns in the UK