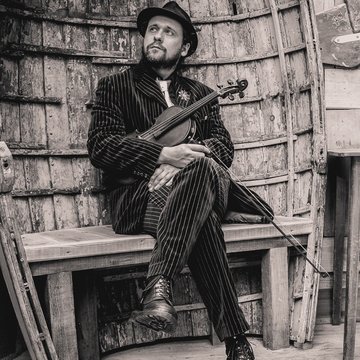 Alex Taylor was born in 1977, in Gloucestershire UK. His family emigrated to Australia in 1989 and settled in Mooloolah, Qld. Alex went to school at Caloundra High, and in 1995 enrolled at the University of Southern Queensland to study classical violin where he graduated with a BMus in classical music specialising in performance in 1997. After completing his undergraduate degree he moved to the UK and started performing with theatrical groups and small bands in Stroud. During this period the focus of the music shifted from the traditional classical repertoire to gypsy, folk and jazz improvisation. In 2002 Alex moved back to Australia to complete his post-graduate degree at USQ with internationally acclaimed violinist Andrew Lorenz. The degree specialised in performance and for the final year assessment Alex performed the Mendellsohn Violin Concerto with a full orchestra, as well as the Cesar Franck violin sonata, which was well received by critics, and allowed him to graduate with Honours in the same year. Alex moved to Melbourne in 2003 and was able to work with artists such as Wendy Rule, Mushroom Giant and The Boy Who Spoke Clouds. Alex also started to develop his passion for combining electronic music with improvised gypsy violin, fronting his first band, Alex Taylor and the Evil Eye, with Simon Quinn (keyboards and electronic production). Alex Taylor and the Evil Eye enjoyed a certain cult success in the Melbourne underground arts scene, due in part to the relationship they enjoyed with the ABODE club in St Kilda, who gave them a lavish venue for photoshoots and employed them for a year-long musical residency. During this time they also worked with members of a tribal belly-dance group to create a more dynamic live show. In 2008 Alex moved to the UK once more, and started working as a violin teacher, as well as playing with many interesting bands such as Inkubus Sukkubus and Dandelion Wine. He was able to perform for the Mėnuo Juodaragis pagan metal fesival in Zarasai, Lithuania. A year later Alex returned to Eastern Europe, this time to Latvia where he did a series of performances with his new band, Innamorati, formed with well-known Bristol DJ and producer, Bertie Bass-Hits. Innamorati was a self-styled 'gypsy dubstep' band. Over time Innamorati enjoyed a modest success and their song 'Clownie' was picked for release with a major dubstep label GENERATION BASS for inclusion in their compilation album. Since moving to Bristol in 2012, Alex has formed his own band, SALVONIA, and has performed with many other groups. He is currently playing for Kizzy Morrell; folk band Kan Koth; and Molly Samson And The Cautionary Tales, as well as playing gypsy jazz for The Sweet And The Lowdowns and gypsy folk for The Jackalopes. Alex has also provided the violin score for upcoming TV show 'Spotless' with Drew Morgan and Neil Davidge (Massive Attack).

I am part of a wide circle of musicians in the Bristol and Stroud area and can be available to play with multiple guitarists, double bass, piano and female vocals.

I can be flexible around timings. Just let me know in advance and it will probably be fine.

I've a fairly simple set up and only need half an hour to set up.

Yes, I have my own instrument I can play acoustically, but also can bring a top quality amplifier and pick-up providing enough volume to fill most venues.

I'm also happy to learn and perform any pieces of music you'd like to hear for your event.

Clients usually compliment me on my warmth of feeling for the music, as well as my ability to pick the perfect songs for the occasion.

Standard Prices
All prices include:Amplification/sound equipment and music. This also includes free travel up to 20 miles from my home town of Bristol!

It was a real pleasure to invite Alex to my dancing event in Bristol. He came prepared, well organised, respectful to other performers and the crowd. He is well accomplished musician, who can effortlessly play classic and contemporary tunes. He and DJ were working in a real time collaboration, which was magical. Their music inspired us. I am very grateful Alex found the time to join us and hope to work with him in future.

Verified
Alejandro A, 2 years ago

Alex played for a special tango theatrical show I developed last year 'Memories de Tango' using professional tango musicians from Buenos Aires and Paris. Despite never having played tango before Alex was able to learn the songs quickly and fit in with the other player well, taking direction and helping us to create a successful show. I'm looking forward to performing with Alex for shows in the UK and Italy in the future.

Alex has performed at a number of our outdoor cinema events throughout the UK including Nottingham Castle, The National Botanic Garden of Wales and Newstead Abbey. He is a very talented musician and his performances have been perfect for our venues and audiences. Always flexible on musical styles and a pleasure to work with, we'd recommend Alex to anyone who wants to bring a touch of class to their event or celebration. Ben Lovell Slip N Slide Events / Adventure Cinema

I was very happy to have Alex Taylor perform for me at a sit-down concert I arranged for my birthday last year. He played an interesting variety of traditional folk music and his own compositions which we all really enjoyed. He was very friendly and good at talking to the audience and I'd definitely recommend Alex to anyone who would like to have a violinist play for their event.