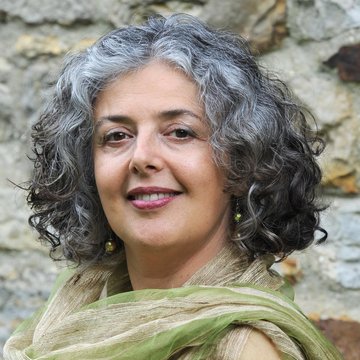 Soprano Alessandra Testai was born in the port city of Livorno, Tuscany. She has her musical roots in the varied traditions of Italian song – opera, classical recital repertoire and the popular songs of the street and countryside. Alessandra began her singing studies at Liceo Musicale Pietro Mascagni, subsequently attending the University of Pisa. She continued in London at the Guildhall School of Music and Drama. Alessandra has sung as a soloist at international festivals in France, Italy and Cyprus. She has given many performances at Finchcocks’ Musical Museum and has sung at Shakespeare’s Globe, Hampton Court, Penshurst Place and Kensington Palace. Alongside her work with Robin Jeffrey, she also gives recitals of 20th Century music with pianist Richard Black. She has given lectures and classes in Italian vocal studies at the Royal Academy of Music, Trinity College, the Royal College of Music, the Royal Scottish Academy of Music and at the University of Malmö in Sweden. During 2017 she appeared at the Uffizi Museum in Florence with a programme celebrating Botticelli’s Primavera and Titian’s Venere, and she gives a yearly recital at Acquaria, the olive grove at Leonardo’s birthplace in Vinci, Tuscany. Together with Robin Jeffrey Alessandra formed the Tivoli Café Band, performing European popular music from 1850-1950.

Life is change! I try to be flexible when possible, if there is a slight change in the run up to the event, just let me know.

No, I do not like to do that because it takes away from the special quality that live music brings to any event. I tend to discourage my clients to have background music in between sets.

I need 35/40 minutes to practise in the venue for the acoustic generally.

Of course, I have a strong sense and lots of experience regarding what will probably work better, that's why I will want to have a chat with you.

Yes I always give my clients an extended consultation period and I generally always sing something new, tailored to their tastes and specific quality of their event.

LB
Luke B
3 years ago

It was a joy to have Alessandra sing at our wedding. Not only did she perform beautifully, she also helped us choose the music and was generally delightful to deal with. Thank you.

A
Angela B
3 years ago, for a Concert in Crowborough TN6

The return of old friends Alessandra Testai and Robin Jeffrey is always a pleasure when they delight and entertain us as they did for the December Concert. Alessandra introduced many of the numbers - (aided by Robin) with her native Italian vivacity and charm, and when singing displayed her natural Robin displayed his great mastery of instrumentsf playing on the huge theorbo,t he oud, the lute and many others - giving us a brief history of each - and accompanied Alessandra as she sang Christmas songs from around the world. The first half of the programme was more formal and consisted of early and baroque music including a piece by Monteverdi and a Scottish cradle song for the 16th centuary which showcased Alessandra’s natural soprano voice. After the interval, Alessandra displayed her skill with languages -often joined by Robin - and sang carols and music from Greece, Catalonia, Italy, and the Hebrides ( in Gaelic), finishing with the rousing traditional carol “Shepherd’s Arise “ from southern England and originally collected by the Copper family in Lewes. It was a lively and enjoyable evening

DA
David P
4 years ago, for a Wedding in Rotherfield

Alessandra sang at our Wedding in Rotherfield Church in June 2018. She was extremely helpful with song choices, and her voice is angelic...even without a microphone her voice filled the Church to the rafters, and added something extra special to our big day. I can not recommend her highly enough! David & Franca