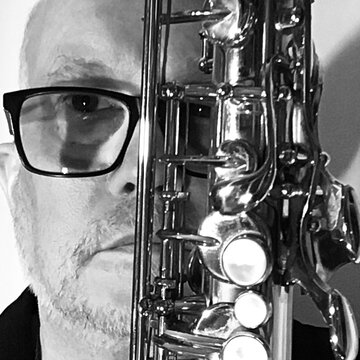 A professional musician for the last 35 years, playing in all genres of music from jazz trio to full symphony orchestra.

Graduated as a percussionist from the Royal Northern College of Music in1985, then spent the next 14 years as a professional woodwind player (with some percussion thrown in too). As well as touring theatre, played in the house band for S4C's "Galu Gari" show. Toured Norway with "The Monroes" pop band in 1986. Worked with Ray McVay's band for 2 seasons at Blackpool Tower Ballroom, shows at Oldham Coliseum Theatre, Wythenshawe Forum, pantos at Birmingham Hippodrome, tenor sax with "Supersax 2", MD and tenor sax with the Big Shot Swing Orchestra and Little Big Shot Band, baritone sax with Martha and the Vandellas touring band, tenor sax with "Midnight Hour" soul band, "Blast Off" function band, solo work with backing tracks.

Normally set up takes no longer than half an hour.

If there is a particular style you would like, please let me know and I’ll try to accommodate.

Absolutely. I bring the tracks and the PA system. All I need is a power supply to plug into.

If there is a particular song you would like, it may be possible to play it if I am given sufficient notice. This gives me time to obtain the backing track and the sheet music, if needed.

Alec was amazing. He played at a party for my husband's 65th birthday and he absolutely made the night. Just fabulous!

Thanks for all your hard work on the concert. You played with great style and we got many positive comments throughout the evening. Look forward to hearing you again. Cheers. Paul

Verified
Chris A, 1 year ago

Many thanks for your professionalism from start to finish. Your sax playing was fantastic and really added to the atmosphere of the evening