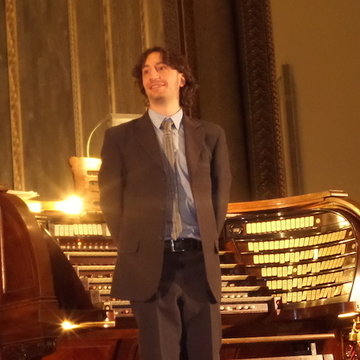 Alberto is the Organist and Director of Music of St Joseph's Highgate church, London. He's also an arranger, keyboardist and pianist.
3 of 21 photos
Organist
London

Organist, keyboard player, pianist and arranger based in London. After my Diploma in organ and composition, in 2013 I obtained the Master of Arts in Organ at Haute école de musique in Geneva (Switzerland), gaining the Special Prize “Pierre Segond” in the class of Alessio Corti. In 2017 I won the 1st prize at the International Organ Competition in Wuppertal, Germany. I took masterclasses of internationally renowned organists such as Lionel Rogg, Guy Bovet, Marie­Claire Alain, Luigi Ferdinando Tagliavini and Pierpaolo Turetta. I perform many concerts, both as soloist and in orchestral formations, all over Europe. In addition, I carry out an important work of transcription for organ of orchestral works: among them the transcriptions of "Pictures at an Exhibition" by M. Mussorgsky, "Messa da Requiem" by G. Verdi and "The Planets" by G. Holst. As arranger/producer, I write and record arrangements for ensembles and songwriters of different genres and styles. I can play guitar and bass at an advanced level, so I'm able to make complete productions in my home studio. I specialized in Orchestration & Arranging at the Morley College, London, in symphonic, popular, jazz and music for screen. I also work in popular music area. I've played keyboards and piano in several bands. My current band is the rock band "This mighty fever". I also collaborate with the songwriter Tim Woodbridge. In the past years I played in the pop band Sfere Cristalline Concentriche, the indie-­rock band Audio Tips, the funk­-soul band Acid Queen, the songwriter Carmine Torchia. In 2007, the band Sfere Cristalline Concentriche won the "Sun 'n' Sound" competition in Milan, and thank to the first prize opened the concert of Biagio Antonacci, a famous Italian singer, at San Siro in Milan, and recorded an ep with Peer Music label. Currently I'm the organist of St Joseph's Highgate church in London.

He’s a very talented organist, has a flawless technique and an excellent musicality.

Accurate and precise, with a great sensitivity, he has shown remarkable technical and expressive abilities for both the wise use of organ stops and the interpretation choices.