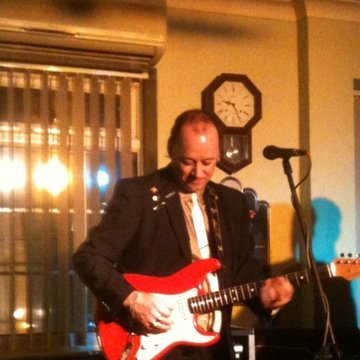 Raised and educated in South Australia, moving to UK in 1979 to finish schooling, Alan, who has an incredible ear for music, became interested in guitar and vocals after watching The Buddy Holly story. Teaming up with his 3 brothers, Alan then formed Apacheshowband and the lads hit the road in 1982, becoming professional and under personal management, they then embarked on many years of hard gigging and travelling. Alan has toured all over Europe and supported some huge names on the way. Marmalade, Showaddywaddy, The swinging blue jeans, Jerry and the pacemakers, The Ivy league, Tommy Bruce, Wayne Fontana, and many more. After more than 20 years on the professional circuit, the lads settled down, and although still occasionally performing with Apache, and Switched on, Alan now likes to concentrate on his own enjoyments in life. (Music still being number one). Alan is also a fully qualified electronics technician who builds and hires his own custom sound and lighting systems. He has also recently got into guitar building and has already clocked up a very impressive catalogue of gorgeous hand crafted instruments. He is internationally known as being one of the closest Hank Marvin tribute guitarists around, and his renditions of Apache, Sleepwalk, Theme for young lovers, and Cavatina will leave you speechless.

As close to Hank Marvin as you can get. outstanding band.

Cavatina had us in tears and was absolutely beautiful.

Thank you so much Alan.

Singers in the UK
Singers in Canterbury
Singers in Dover
Singers in Maidstone
Singers in East Sussex
Singers in Rochester
Company
Discover
Download
Join us on
© Encore Technologies, Ltd.
Crafted with bagels and in London