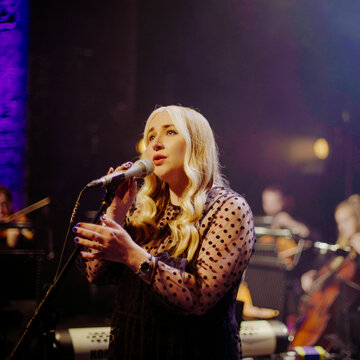 Ainsley is an experienced songwriter and singer and is one of the UK’s leading and most diverse folk/pop singers. (Traditional/Gaelic/Pop)
3 of 12 photos
Singer
London
Public liability insurance of £10 million

Ainsley is an experienced songwriter and singer and is quickly becoming one of the UK’s leading and most diverse folk singers, after various nominations at the MG ALBA Scots Trad Music Awards. Much of her own material is performed with touring band ‘Barluath’ and now ‘Ainsley Hamill and Band’. DSC_0418Ainsley hails from Cardross, and has been involved in singing, dancing and performance from a young age, and specialises in songwriting, Gaelic Song and English Song. Ainsley’s love of Gaelic song was nurtured whilst studying at the Royal Conservatoire of Scotland, where she obtained a First Class Honour’s Degree in Scottish Music, with Gaelic Song as her Principal Study, under the tuition of Kenna Campbell and Màiri MacInnes. There she met her fellow band mates, and Barluath was formed. In recent years, the band has recorded two studio albums, ‘Source’ and ‘At Dawn of Day’, along with touring extensively in Britain and abroad. In October 2013, Ainsley won The Silver Pendant at The Royal National Mòd, held in Paisley. She has also appeared in the final of the An Comunn Gàidhealach Gold Medal competition in 2014, and 2015. Ainsley was also named as a BBC Radio Scotland Young Traditional Musician of the Year Finalist in 2014/15, and recently nominated for Gaelic Singer of the Year and Folk Band of the Year, with band Barluath at the MG ALBA Scots Trad Music Awards.

Vocalist Ainsley Hamill has a rich, colorful voice. Hers is the kind of voice that could sing a page of the Glasgow phone book and draw a standing ovation.