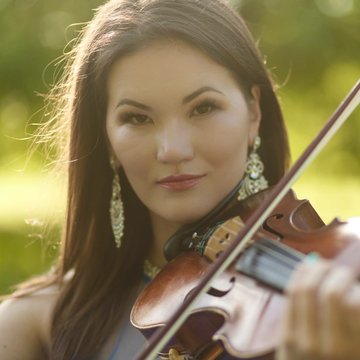 Aina is a great musician with an exceptional background in Music. Highly experienced in performing solo, chamber ensemble and orchestras.
3 of 13 photos
Violinist
London
Public liability insurance of £1000000 million

Graduated from the Kazakh National Conservatory with a BA Honours Degree in Art of Music. After graduation she lead the Mayor’s Concert Orchestra of Almaty city from 2008 to 2015. She As an orchestra player she performed in England, Italy, Germany, Switzerland, Russia and the United States as co-leader of the Greater Grand Forks Symphony. In recognition of her professionalism, She was invited to play in Azerbaijan, Tajikistan, Uzbekistan, Kyrgyzstan, Belarus, Ukraine, Armenia and Moldova. As a freelance violinist , She has worked in the studio in collaboration with various Musician, she has also participated in various projects including the 24/04 World Orchestra (the concert dedicated to the 100th anniversary of the Armenian Genocide), Al Bustan Festival and Opera Gala in Lebanon, Marylebone Music Festival, Aberystwyth MusicFest and Night Under Stars:Russian Soul.

We always try our best to be flexible to help ensure your event runs as smoothly as possible. If timings change slightly in the run up to the event just let us know. But if it happens in event day you need to pay extra fee.

Yes, we provide this for an additional fee.

I usually set up about 15 to 30 min. before the performance time.

We are definitely happy to chat through and make sure we find what works for you.

If a song isn't included in our song list there may still be a chance we already know it. If there is a special song you'd like us to learn we are happy to do this for you. There is a fee of £30 for this service to take into account rehearsal times.

Standard Prices
Packages
Wedding ceremony
This includes music before the service begins, music during the signing of the register, and music as guests leave.
£200

Verified
Natali B, 1 year ago

A great thank you for a brilliant performance at Gala Dinner, CC Forum Investment Blockchain and AI event, who welcomed inspirational speakers, industry thought leaders, investors, entrepreneurs and start-ups to #CCForum London. So delighted to greet Natalya Strings. Our guests were amazed by 8 strings chamber orchestra. Will definitely consider Natalya Strings for our future events and highly recommend to others. You are the best!

Hi Natalya, Thank you so much for your fantastic performance at our Wedding in Le Meridien Hotel in Mayfair last Saturday! Our guests kept telling us how great the String Quartet is! We all loved all the music you played which really matched our wedding theme! You are also very flexible in accommodating most of the songs we would like you to play! I hope you all had a great time too!​ This is the second time you have performed for us and you never fail to awe us! You are all elegant and beautiful with very nice personalities! We would definitely recommend you to anyone we know! The positive comments and praises we got from our guests assured us that we did the right choice in choosing you to share your beautiful repertoire. Thank you very much again for your great performance! We all enjoyed it!​ I'll ask my guests to leave great reviews on you as well!​ God bless, Vanessa and Mark

Dear Aina, Thank you so much for a wonderful experience. I invited Aina to my birthday party as I really wanted to have a Live music at my party. Aina is very friendly, responsible, and professional musician. She is very experienced violinist. We did not have too meet too many times to discuss my event which was great. She had great suggestions and really helped me to make right decisions music wise. All my friends and family really enjoyed the whole party as everyone was dancing, having fun. I was very pleased to work with Aina and would highly recommend her service. Thank you again and good luck. Katia 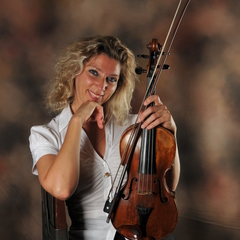 Aina is professional musician with great background experience. She is principal Violinist in Natalya Strings. I am always happy to play with her Performances.