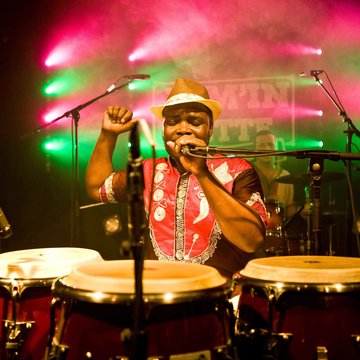 Afrik Bawantu is an orchestra producing African rhythm-driven, dance inducing fusion with traditional roots, formed by Ghanaian vocalist and djembe drummer Afla Sackey. Afrik Bawantu’s original compositions blend highlife from West African percussion and more funk, rock genres, enhancing the cross-cultural collaboration. The uplifting rhythm section in harmony with roaring brass accompanied by high-powered bass lines creates a powerful Afro-Funk sound with an energy that drives audiences to the dance floors. Afla’s talent has been recognised by many well-established musicians whom he has collaborated with and played as a session musician. Great artists such as Sun Ra, Ginger Baker, Seun Kuti, Sons Of Kemet, Tony Allen, Yaaba Funk, Dele Sosimi and many more. Afrik Bawantu has been invited to the BBC Radio Theatre to be a part of Global Beats program in 2015 and to perform live at Outlook Inspirations 50’s Anniversary Awards in 2016. They have performed at numerous festivals in the UK and Europe. In London they have headlined the Africa on the Square festival in 2015 and London African Festival. Other major festivals include Shambala, Secret Garden Party, Back2Black, Green Man Festival, Africa Utopia, Fieldview Festival, Kendal Calling and others. Jam’in Jette Festival in Brussels has had the band twice within half a year.

Afla and the band were INCREDIBLE. There were many musicians at our wedding party, and they were all blown away by the enthusiasm, professionalism, and talent of the band. So many people said to me that they were the best band they'd ever seen play at a wedding. If you want to dance your socks off with a HUGE smile on your face, then these guys are for you. Thanks for making it such a memorable evening guys, you're the best! 🥰😍😍

JB
Jon B
3 years ago, for a Birthday party in Oxford OX33 1EX

I cannot get across how amazing Afla and the band were when playing at my party! Their energy was incredible and we were dancing non stop. They are able to create a great connection with the audience which reflects in the special atmosphere that is created. I had so many messages from guests saying they couldn't believe how good the band were. Blew all my expectations and I wouldn't hesitate for a second in re booking - they made the party!

C
Charlotte A
4 years ago, for a Bar / Club / Venue event in High Holborn

Armed with three congas and a djembé, Sackey makes his mastery of his art crystal clear, with mind-boggling solos and strong vocal lines sung in counterpoint with his heavily syncopated drum parts. A fantastic performance and dining experience rolled into one, I can’t wait to return to Pizza Express for further performances, and will definitely be attending Afla Sackey’s next London gig!