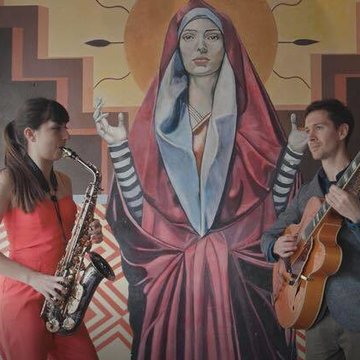 Formed in January 2018, the Aeolos Duo is a lively ensemble specialising in Jazz, Latin and Bossa Nova music for any occasion. With the soulful sounds of the saxophone and the rhythmic grooves of the guitar, the Aeolos Duo provides an elegant sound which would add a touch of sophistication to any event. Craig Carri - Guitar Since completing his BMus degree at the University of Hull in 2012, Craig has been working in London's busy music scene as a professional musician, finding work as a performer, musical director, composer, and tutor. Craig has been performing live music since the age of 15, playing many pubs and night clubs in Dublin and Kildare, Ireland. In 2009, Craig began his studies at the University of Hull to further his musical knowledge and abilities. He gained a wealth of experience playing with many jazz and pop/rock/soul bands, performing music by Steve Reich and Phillip Glass, in classical guitar ensembles, musical theatre productions such as Rent, Alice in Wonderland & more. During this time, Craig also performed at the Edinburgh Fringe Festival for three consecutive years, two of which were complete sell-out shows. For the most recent of these Fringe shows, Craig was appointed Assistant Musical Director, leading many of the band's rehearsals, which ended up winning a NSDF Commendation for Musicianship. Craig is now based in London, becoming a part of the local and national music scene, and tutoring around the city. He performs in London's jazz venues such as the Vortex, Ronnie Scott's and in local pubs and bars. Lucinda Dunne Lucinda Dunne is a recent graduate of the Royal College of Music, where she studied both saxophone and clarinet under professors Kyle Horch and Janet Hilton. She previously studied at Chetham’s School of Music with Andrew Wilson. In 2012, Lucinda reached the woodwind category final of BBC Young Musician of the Year and also attained her DipABRSM in piano performance. She has gained orchestral experience playing with groups such as the National Youth Orchestra, Piccadilly Symphony Orchestra, and Orchestra Vitae, performing at notable venues including The Sage Gateshead, St John's Smith Square and Royal Festival Hall. Lucinda debuted as a soloist with the RCM Student Film Orchestra and performed Benson’s ‘Aeolian Song’ with the RCM Wind Ensemble, conducted by the Head of Woodwind, Simon Channing. She most recently performed as a soloist with the Portobello Orchestra in March 2018 with Weber's Clarinet Concerto (No 1). Lucinda also enjoys doubling and being part of pit orchestras for musical theatre. Some shows Lucinda has recently performed in include Top Hat, Sweet Charity, Thoroughly Modern Millie, West Side Story, Bugsy Malone and Guys and Dolls. She has also taken part in masterclasses with saxophonists Frank Timpe, Lars Mlekusch, Kenneth Tse, Gerard McChrystal and Arno Bornkamp and attended the Laubach saxophone course in summer 2015. Lucinda enjoys performing as the tenor player of the Kumori Quartet, as the clarinettist in the jazz group David McTea and the Swinging Magpies and as alto saxophonist in the Aeolos Duo with guitarist Craig Carri.

Embraceable You
When You Wish Upon A Star
Alone Together
Someday My Prince Will Come
Confirmation
Ornithology
Donna Lee
If I Were A Bell
Cherokee
Darn That Dream
Days of Wine and Roses
Moose the Mooche
The Man I Love
Love is Here To Stay
Summertime
Without a Song
I’ve Never Been in Love Before
Sunny Side of the Street
St Thomas
Stompin at the Savoy
All of Me
But Not For Me
Ain't Misbehavin'
Fly Me To The Moon
Reflections – Monk
Blackbird – Beatles
Here, There and Everywhere - Beatles
Mrs Robinson – Simon and Garfunkel
Me and Julio Down by the Schoolyard – Paul Simon
Your Song – Elton John
Tea for Two
New York State of Mind – Billy Joel
God Only Knows - Beach Boys

Great music - perfect for our event!

We hired Aeolos Duo for our wedding reception - we were really pleased with the music - they played fantastic songs and created the perfect vibe. Highly recommend!

We had a slighter older audience at our wedding and wanted something with a more sophisticated feel. Initially we thought the Aeolos Duo would be nice for background music, but as it turned out, our guests were keen to pull up a seat to watch what turned into a private concert. It's a real credit to these two fabulous musicians! Also two very nice people!

We were delighted to have Craig and Lucinda perform at our wedding reception. It was absolutely beautiful music and perfect for the occasion. They came well prepared, and were very easy to communicate with through the whole process. Would definitely recommend!

Lucinda and Craig sounded great! Very professional, organised, they even learnt a song I requested for the occasion. My friends enjoyed it a lot too. It was perfect for the occasion!