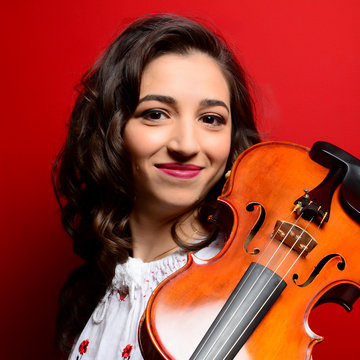 Romanian-born UK-based soloist, recitalist, chamber musician and violin teacher, Adriana Cristea combines her passion, expression, expertise, perseverance and talent into a multifaceted and fruitful career. In January 2018 she launched her first recital project called Romania With Love dedicated to classical Romanian music with folk influences, promoted both online and in recitals in the UK. Her second and third projects dedicated to solo violin music, Journey with Bach and Fiddler With Musical Passport were launched in July 2018 and January 2020. A graduate of the Royal Northern College of Music in Manchester, she has played in numerous solo concerts and recitals in Europe and the Middle East, in venues including: Concertgebouw in Amsterdam, St.Martin-in-the-Fields and St James’s Church Piccadilly in London, and the Romanian Atheneum in Bucharest. Born to a family of musicians and started to play the violin at the age of five, Adriana has been the recipient of many prizes including the 1st prize, the special prize and the George Enescu medal at Remember Enescu International Violin Competition. She has also been a laureate of Grand Prize Virtuoso International Music Competition, which has given her the opportunity to debut at the Royal Albert Hall in London in 2020. Her future engagements for 2020-2021 season include concerts in the UK.

This should be ok, as long as you let me know before booking travel tickets (where necessary). Otherwise, this is to be discussed by email.

I usually need around 1 hour for set-up and sound check before the performance.

Yes, apart of the piano, which is usually provided by the venue, in case of violin and piano performances.

On 20 February 2020, as part of Aylesbury's lunchtime series, Adriana Cristea and Mina Beldimanescu (with discrete national clothing) delighted a large but very damp audience - it was the kind of weather concert promoters dread - with a beautifully put together hour of music from their native land: From Romania With Love. We dried off quickly to a mix of violin and piano solos and duos, comprising - with one exception - pieces which few of us can have heard or known about. But the selection offered contrasts of earthy folk dancing, stomping and high-flying, as well as fantasy, poignancy, loss and staunch courage. Adriana and Mina introduced the music effectively, and their playing was fearlessly on top of every note. They ended with Bartok's ubiquitous Romanian Dances, in totally idiomatic performances. You could smell the soil. Nothing but praise was heard as the audience left. Hugely enjoyable, as well as opening a new door for the curious - and it had stopped raining! David Mulraney, Aylesbury Lunchtime Music.

Verified
Elisabeth B, 1 year ago

Thank you for the recital you gave at All Saints, High Wycombe on Monday 30th September. The varied programme was very enjoyable and provided real light and shade. It was lovely to hear a mix of new and familiar pieces and your storytelling enhanced the experience.

Adriana Cristea and her piano partner gave an outstanding concert at the Churches Together in Maldon lunchtime concert in August entitled 'Romania with Love'. Her music on the violin inspired us all with thoughts of her country and many were called to give her a standing ovation.

Verified
Michelle B, 2 years ago

Many thanks to Adriana and Ana for playing for our 250 Gala Dinner guests. We had rave reviews from our guests who enjoyed it immensely, your music added to the ambience of our much anticipated evening at the Cutty Sark. The fact that you delivered such a beautiful performance at very short notice is a testament to your talent and professionalism, it was a pleasure to work with you.

Adriana Cristea gave a wonderful performance, full of generous music-making and a carefully constructed programme. The audience were delighted!

Verified
Christopher B, 2 years ago

It was a pleasure to welcome Adriana and Mina to All Saints' Church Hertford for a recital featuring music by Romanian composers. Their performance was full of flair, passion and excitement. The audience were enthralled by their special understanding of this repertoire and by the expressive warmth of their presentation in traditional costume. A dramatic and immaculate performance and we look forward to their next recital with great anticipation.

'On Wednesday 30th January this year, we had the great pleasure of welcoming back to Brentwood Cathedral the violinist Adriana Cristea, who performed her ‘Dancing With Bach’ programme in our Song School. Greeted with smiles from the audience, which included many Bach enthusiasts, Adriana finished her Recital to rapturous applause. Her playing was exquisite throughout with her sensitive and passionate interpretation of Bach’s solo music. We were very fortunate to have Adriana share with us her wonderful joy of J.S. Bach. We look forward to welcoming her back.’