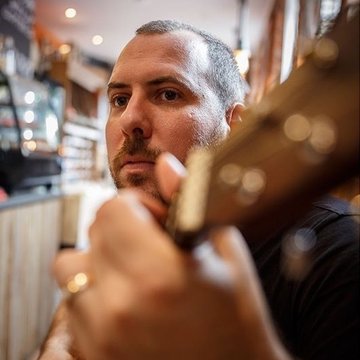 I've been working as a self employed musician since around about 2012, hosting numerous Open Mic Nights across Central Scotland as well as playing in Bars and Restaurants and performing at Weddings both as a soloist and with a band. I'm a professional and flexible guy who feels privileged to be able to make a living through music. I've also got some original music up on Spotify and iTunes.

Paranoid
C’est la vie
Hit Me Baby One More Time
Black & Gold
Cruel Summer
Riptide
Close to You
If I Ain’t Got You
Caledonia
Little Lion Man
Ain’t No Rest For The Wicked
Laid
The Bonnie Ship The Diamond
I Want To Break Free
Ain’t Nobody
Breakfast At Tiffany’s
You’re The Voice
To Love Somebody
Stand By Me
Show Me Heaven
California Dreamin’
My Hero
Live it Up
Tell it to My Heart
One of Us
Iris
Drops of Jupiter
Wonderful Tonight
Don’t Stop
Dancing in The Dark
Shut Up and Dance
Dreams
Ho Hey
Budapest
Sit Down
Baby Shark
Blame it on Me
Sweet Home Alabama
Folsom Prison
Come Together
Let it Be
Shotgun
Yellow
Teenage Kicks
Dignity
Wonderwall
Last Request
Wonderful Life
Mr Brightside
Viva La Vida
500 Miles
Cruel Summer
Breakfast at Tiffany’s
You’re the Voice
Bulletproof
Weak
Tell it to my Heart
California Dreamin’
Hot ‘n’ Cold
My Hero
Times Like These
In The End
No Cars Go
Rome Wasn’t Built in a Day
Waterfalls
More Than This
Pompeii
Songbird
Lonely Boy
L.S.F.
Getting Away With It All
Don’t Look Back Into The Sun
Mr Writer
Pounding
The Modern Way
Let Her Go
Wagon Wheel
The Wolves
Keep Your Head Up
Yellow
Coconut Skins
Good Riddance
Skinny Love
Where Did It All Go Wrong
The Book of Love
Someone you Loved
Fallin’
If I Ain’t Got You
The Mother We Share
Have You Ever Seen The Rain?
Get Lucky
Jolene
Pumped Up Kicks
What is Love?
Sex On Fire
Royals
Little Talks
Candy
Angels
T-Shirt
If It Makes You Happy
Long Train Running
She Drives Me Crazy
Fast Car
Drive
Come As You Are
Something In The Way
Other side
Scar Tissue
Tribute
Here’s Where The Story Ends
Semi Charmed Life
Hey Ya
Holding Out For A Hero
Bad Moon Rising
Save Tonight
The A-Team
Keep On Moving
When I Come Around
Won’t Back Down
Fisherman’s Blues
You Got The Love
Not 19 Forever
With or Without You
Kids
Smalltown Boy
Superstition
Linger
There She Goes
Heartbeats
Such Great Heights
Juxtaposed
Run
Together in Electric Dreams
Brand New Start
Ain’t No Sunshine
All The Lovers
Suspicious Minds
That’s Life
Handbags and Gladrags
Mustang Sally
Call Me Maybe
Nothing’s Gonna Stop Us Now
Get Lucky
Hold Back The River
Stay With Me
Ring of Fire
Collide
Desire
Just One
Baby Can I Hold You
Customer questions

I’m unsure. I hope that it’s the personal touch. I love what I do and I’m so grateful to have the opportunity to make a living out of it so I try to be as professional and amenable as possible.

I’ve played at Venues all across Scotland including Oran Mor, The Old Fruit Market, Edinburgh Corn Exchange, various Hilton and MacDonald Hotels, numerous Castles and Stately Homes including Dumfries House, Hopetoun House and Dundas Castle plus bars and restaurants in most Scottish Cities and towns.

Personally, I really like Fink, Tom McRae and The Tallest Man on Earth but I generally listen to a real eclectic mix of music. I love my Discover Weekly lists on Spotify and finding new music. I can send you a link to a Spotify Playlist if you’re genuinely interested.

The band did the wrap party for the final season of “Still Game” which was really cool as there were lots of Scottish Comedians and Actors kicking about. We also did the Wedding of a member of “The Blubells”.

I am very flexible and strive to ensure your event runs as smoothly as possible. If timings change slightly in the run up to the event just let me know.

Absolutely. This isn't a problem. If you'd like a DJ, Karaoke service, prices are shown on the pricing section of the page.

Solo, I can be set in under 20 minutes, the band take roughly 1-1.5 hours. This does depend on the venue being aware of space etc so I usually like to get in touch with them prior to the event to check space/access/power etc.

Within reason, Yes. It's generally easier if you pick some songs you like and allow me to work a setlist around this as during the gig I'll pick songs based on the crowd and how they respond.

Yes, unless the venue has specific requirements. I have PA equipment to suit various sized venues and can also play fully acoustic if that’s more appropriate.

Yes, happy to look at song requests. This is generally free of charge unless the song is overly complex and I’m going to need to spend a lot of time on it. A fee for this can be worked out.

We cannot thank Adam enough for the incredible job he did playing during the dinner at our wedding. One of the highlights of the day for us & our guests was Adam. Our guests are still talking about how amazing he was! The perfect wedding day singer 🥰 Lots of love, Mr & Mrs Dias

Adam made our drinks reception so special and that little bit different. All our guests raved about how good he was - great songs, great voice and a lovely guy too. :)

Adam was fantastic. Good range of songs that everyone enjoyed. Guests keep telling us how much they enjoyed him playing during the drinks reception and the variety of stuff he played went down so well. Thanks Adam!

Adam was great, we could not reccommend enough to others.

SF
Shelley F
3 years ago, for a Wedding in Seamill

"We'd both like to thank you so much for singing at our wedding, you were amazing. So many people asked us who you were and said you were really good, it made the ceremony extra special."

CH
Christine H
8 years ago, for a Wedding in Stirling FK9 5PB

Thanks again for playing for us on Saturday at our wedding - fantastic choice of songs and beautifully sung. You made our day very special and all our friends and family really enjoyed the evening x