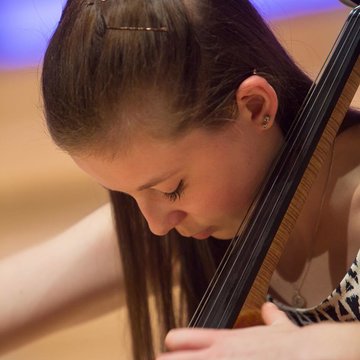 I am an 20 year old Cellist currently studying at the Royal Northern College of Music. Available for Weddings, Concerts and events.
3 of 8 photos
Cellist
Manchester

Abi is a twenty-year-old Cellist from Birmingham. She is currently studying at the Royal Northern College of Music with Petr Prause. She has performed with the National Youth Chamber Orchestra and played in venues such as Symphony Hall Birmingham, Birmingham Town Hall, Bridgewater Hall, and Cambridge University. She has toured with her orchestra, Vivace, in Poland, Croatia, Belgium and Barcelona. Abi has had coaching from world renowned quartets such as The Carducci Quartet and The Chillingirian Quartet. Abi began playing cello at the age of 8 and immediately joined her local orchestra at Solihull Music Service. Throughout her grades, Abi attended Lake District Summer Music for a number of years where she gained invaluable chamber music and orchestral playing experience with other young musicians. At school, Abi was part of many orchestras, choirs, and bands. She frequently did solos in concerts and also formed her own string quartet which performed at events throughout the school such as presentation evening, Principals reception and Remembrance Day. She has played in musicals such as Oliver!, Fame, Singin' in the Rain, West Side Story and The Sound of Music. At the age of 15, Abi completed her grade 8 and performed Elgar's Cello Concerto at Bushall Hall in Solihull. She then went on to study with Helen Edgar of the City of Birmingham Symphony Orchestra. Abi participated in the Wigmore Hall London International String Quartet weekend at Chetham's School of Music for two years where she had coaching from the Carducci Quartet and other professional musicians such as Pavel Fisher, Raphael Todes, and Graham Oppenheimer. When Abi was 17 she was accepted into the National Youth Chamber Orchestra which concluded with a concert at Cambridge University. She performs at weddings and events with the Ridente String Quartet formed at Solihull Music Service in 2011. In 2014 Abi was accepted into four different music colleges with scholarships around the UK and took her place at the Royal Northern College of Music starting in September 2015. During her first two years of Music College, she has performed with many orchestras including the RNCM Film Orchestra and the RNCM Session Orchestra with Bill Lawrence. Abi has played at the prestigious Bridgewater Hall in Manchester with Manchester Inspirational Voices and the RNCM Session Orchestra. Abi had her debut solo performance in May 2017 at Holy Trinity Church in Stratford-upon-Avon and is playing concertos with numerous orchestras an a number of lunchtime concerts around the UK in 2018/2019.

Big thank you Abi to both you and Mackenzie. Fabulous evening of music in a wonderful setting. Magical and please invite us to future performances

Fantastic performance in a great venue. We had a lovely evening.