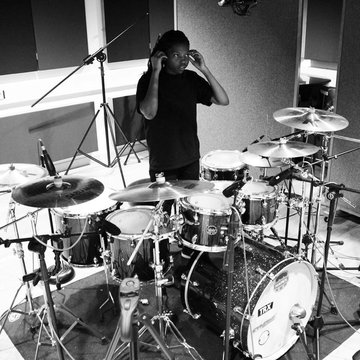 Aaliyah Jay (affectionately known as AJ) is a multi-instrumentalist and educator from the United Kingdom, who enjoys playing a total of 6 instruments and also has a "pleasing" singing voice. She has always had a passion for music and started playing the drums from the tender age of 3 years old. By the age of 8, she was already playing in venues across the county. Despite the early start, AJ’s professional music career initially began at the Roland Music Academy at age 17. It was here that she received core training to prepare her for life in the music industry as well as certificates in various music exams. In 2015 Aaliyah Jay was recognised as one of the world’s most talented female drummers alongside the likes of Anika Niles, Cora Coleman and others placing top 40 in the world according to popular music magazine “DRUM!”. This was a great achievement so early in her career. In this same year, Aaliyah Jay was offered her first endorsement with TRX Cymbals USA. Aaliyah Jay has performed in many different cities across the globe. Destinations include London (UK), Krakow (Poland), Toronto (Canada), Los Angeles, California (USA), Orlando, Florida (USA), Paris (France) and many others. She has also had the opportunity to perform at some of the World’s most prestigious venues such as the Birmingham Symphony Hall (UK) aged just 17. As well as being a travelling musician, Aaliyah Jay is currently studying a Bachelor's Joint Honours Degree in Music Technology and Popular Music at the University of Wolverhampton and also spearheads her own business. Aaliyah Jay credits her inspiration to the life and legacy of Tony Taylor Jr, Devon Taylor, Tony Royster Jr, Chris Coleman, Anika Niles, Aaron Spears, Gerald Hayward and Venzella Joy. Aaliyah Jay gives 100 per cent effort in everything she does and lives by her motto "Let your passion set the tempo."

AJ is an organised band member who takes it upon herself to encourage focus and motivation in those she plays with. This is achieved in a creative atmosphere which allows for good jam sessions and sharing of ideas.

It is a delight to work with AJ as she is a very reliable and trustworthy person who is creative and passionate in all aspects of her work. She is also very friendly and polite.

Aaliyah is good at what she does. She is adaptable and can find ways to make everyone comfortable. She is patient and reliable

I have been working with Aaliyah for over 5 years now and she has a strong passion for working with people and bringing out the best in them. She plays multiple instruments to a very good standard and is able to speak to people at their level of understanding, she is patient and empathetic towards everyone that crosses her path.

I have known Aaliyah-Jay since she enrolled on the BTEC L3 Extended Diploma in Music Performance in September 2013. During this time she has been committed to learning and improving her musical skill and knowledge. She produced some very well-presented written work and performances, meets deadlines and is always eager for feedback.

Aaliyah is an excellent drummer and a very strong bass player with a pleasing singing voice as well. I have found her a very pleasant student to work with and so have most colleagues. She attains very well in practical work and performance, including 'Popular Songwriting' which required her to compose her own song.