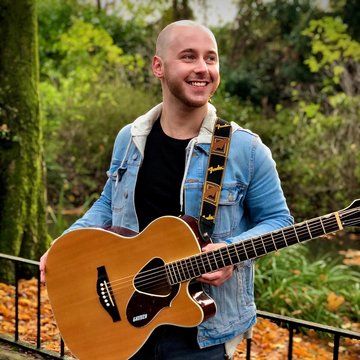 Music and entertaining is my passion! I started playing music when I was nine years old. I attained top music grades in high school all the way to attaining an honours degree in popular music in 2017. What makes my acoustic act stand out is my driving percussion and powerful vocals, which will encourage you to get out of your chair and dance! I can perform covers from the 60’s until present day, and will learn any song you’d like given proper notice. Get in touch, I look forward to hearing from you!

‘Teenage Dirtbag’ by Wheatus
‘Sex On Fire’ by Kings of Leon
‘Crazy’ by Gnarls Barkley
‘Mr Brightside’ by The Killers
‘Titanium’ by David Guetta ft. Sia
‘I’ll Be There For You’ (Friends Theme)
‘Rolling in the Deep’ by Adele
‘Pour Some Sugar On Me’ by Def Leppard
‘Never Gonna Give You Up’ by Rick Astley
‘Little Lion Man’ by Mumford & Sons
‘Can You Feel The Love Tonight’ by Elton John
‘Patience’ by Take That
‘I’m Yours’ by Jason Mraz
‘Valerie’ by The Zutons
‘All Star’ by Smash Mouth
‘Livin’ on a Prayer’ by Bon Jovi
‘Problem’ by Ariana Grande
‘Love Shack’ by The B-52s
‘Lonely Boy’ by The Black Keys
‘Complicated’ by Avril Lavigne
‘Livin’ La Vida Loca’ by Ricky Martin
‘I Will Wait’ by Mumford & Sons
‘Use Somebody’ by Kings of Leon
‘Feel It Still’ by Portugal. The Man
‘Wagon Wheel’ by OCMS
‘Sex Bomb’ by Tom Jones
‘The Greatest Show’ (The Greatest Showman)
‘Africa’ by Toto
‘All the Small Things’ by Blink-182
‘Bring Me To Life’ by Evanescence
‘Don’t Stop Believin’’ by Journey
‘Havana’ by Camila Cabello
‘Pompeii’ by Bastille
‘Ruby’ by Kaiser Chiefs
‘Shut Up and Dance’ by WALK THE MOON
‘Supersoaker’ by Kings of Leon
‘Stacy’s Mom’ by Fountains of Wayne
‘Uptown Funk’ by Mark Ronson
‘Walking on Sunshine’ by Katrina and the Waves
‘You Spin Me ‘Round (Like a Record)’ by Dead or Alive
‘Dreaming of You’ by The Coral
‘Viva La Vida’ by Coldplay
‘Don’t Look Back in Anger’ by Oasis
‘Would I Lie To You’ by Charles and Eddie
‘Sweet But Psycho’ by Ava Max
‘Demons’ by Imagine Dragons
‘Sweet Child O’ Mine’ by Guns N Roses
‘Sweet Home Alabama’ by Lynyrd Skynyrd
‘Everybody’s Changing’ by Keane
‘A Little Respect’ by Erasure
‘Ho Hey’ by The Lumineers
‘Bad Moon Rising’ by Creedence Clearwater Revival
‘Ring of Fire’ by Johnny Cash
‘Sweet Caroline’ by Neil Diamond
‘Mr Blue Sky’ by ELO
‘Stayin’ Alive’ by The Bee Gees
‘Zombie’ by The Cranberries
‘Dance the Night Away’ by The Mavericks
‘Crazy Little Thing Called Love’ by Queen
‘Celebration’ by Kool & The Gang
‘Auld Lang Syne’
‘Loch Lomond’ by Runrig
‘500 Miles’ by The Proclaimers
‘Burning Love’ by Elvis Presley
‘I Don’t Need Your Loving’ by Inglorious
‘Judas’ by Fozzy
‘Same Jeans’ by The View
‘This is Gospel’ by Panic! at the Disco
‘Take it Easy’ by Eagles
‘Fortunate Son’ by CCR
‘Funky Town’ by Lipps, inc.
‘Shook Me All Night Long’ by AC/DC
‘Dancing in the Dark’ by Bruce Springsteen
‘Danger! High Voltage’ by Electric Six
‘Take On Me’ by a-ha
‘Pencil Full of Lead’ by Paolo Nutini
‘Chandelier’ by Sia
‘Hennessee’ from ‘Nashville’
‘Basket Case’ by Green Day
‘The Boxer’ by Simon & Garfunkel
‘Bad Girls Club’ by Falling In Reverse
‘Holiday’ by Green Day
‘Boulevard of Broken Dreams’ by Green Day
‘How to Save a Life’ by The Fray
‘Black Roses’ from ‘Nashville’
‘Iris’ by The Goo Goo Dolls
‘Jackie & Wilson’ by Hozier
‘Mary’ by Kings of Leon
‘I Wasn’t Expecting That’ by Jamie Lawson
‘I Won’t Give Up’ by Jason Mraz
‘Year 3000’ by Busted
‘Cult of Personality’ by Living Colour
‘Can’t Get You Out Of My Head’ by Kylie
‘F*** Her Gently’ by Tenacious D
‘Tribute’ by Tenacious D
‘Never Enough’ from The Greatest Showman
‘Mr Curiosity’ by Jason Mraz
‘I Miss the Misery’ by Halestorm
‘Good Riddance (Time of Your Life) by Green Day
‘This Charming Man’ by The Smiths
‘Wings’ by Birdy
‘On the Road Again’ by Willie Nelson
‘Holy Diver’ by Dio
‘Last Resort’ by Papa Roach
‘Fix You’ by Coldplay
‘The Night We Met’ by Lord Huron
‘Brick by Brick’ by Newton Faulkner
‘Ain’t No Rest for the Wicked’ by Cage the Elephant
‘Homegrown’ by Zac Brown Band
‘Delilah’ by Tom Jones
‘Angels’ by Robbie Williams
‘Human’ by Rag n Bone Man
‘I Don’t Feel Like Dancin’’ by Scissor Sisters
‘Mr Rock and Roll’ by Amy MacDonald
‘The Wonder of You’ by Elvis Presley
‘Lyin’ Eyes’ By Eagles
‘Hotel California’ by Eagles
‘Peaceful Easy Feeling’ by Eagles
‘WALLS’ by Kings of Leon
‘Born to Run’ by Bruce Springsteen
‘Can’t Get Enough’ by Bad Company
‘The Boys of Summer’ by Don Henley
‘Hold Back the River’ by James Bay
‘Rockin’ All Over The World’ by Status Quo
‘Girls Just Wanna Have Fun’ by Cyndi Lauper
‘In Too Deep’ by Sum 41
‘American Idiot’ by Green Day
‘Here’s to Us’ by Halestorm
‘Scream! (Funk My Life Up) by Paolo Nutini
‘Dayman’ from Always Sunny in Philadelphia
‘C’est La Vie’ by B*witched
‘Give Me A Sign’ by Breaking Benjamin
‘How Long’ by Eagles
‘I Drove All Night’ by Roy Orbison
‘Minority’ by Green Day
‘Someone New’ by Hozier
‘That’s the Way It Is’ from Red Dead Redemption 2
‘Happy Birthday’ on request
‘Honestly’ by AJ Flynn
‘Talk’ by AJ Flynn
‘Florida Sunshine’ by AJ Flynn
‘Cliche’ by AJ Flynn
‘Angels Must Fly’ by AJ Flynn
‘She Danced All Over My Heart’ by AJ Flynn
‘Trust Fall Cannon Ball’ by AJ Flynn
‘Sing Your Song’ by AJ Flynn
‘Progression’ by AJ Flynn
‘Illusions of Innocence’ by AJ Flynn
‘Traveler’ by AJ Flynn
‘The Lucky One’ by AJ Flynn
Customer questions

My full, driving sound and my ability to get people up on the dance floor!

I’ve performed at various venues across Fife and Edinburgh! Most notably The Jam House in Edinburgh.

Artists include Eagles, Kings of Leon, Green Day, Newton Faulkner, Mumford & Sons. I like to feel I bring a mix of genres together to create something unique!

I got through to the final of a UK wide talent competition through my day job, and performed in front of over a thousand people at Butlins in Bognor Regis.

Just get in touch with me and hopefully we can sort something out!

Absolutely! Just let me know on the day what kind of atmosphere you’d like!

If no sound system is present in the venue, I always allow for one hour of setup. If the venue has its own back line and sound engineer then around 15 minutes.

Give me plenty of notice then yes!

Standard Prices
All prices include:I provide all my own equipment and can learn any song you like given enough time!

AJ provides such a good night of entertainment, singing songs we all knew and could sing along to. Excellent night and the performance definitely contributed to it. 5 stars!

What a performer! Played at my bar and had the place jumping. Will definitely have back. 10/10 xx