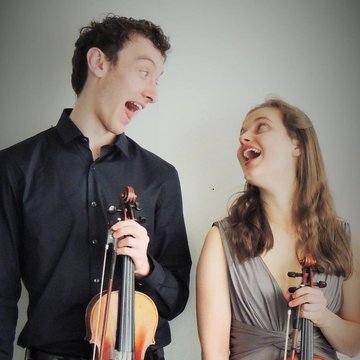 Professional String Duo based in London and York, available for all event types on any combination of violin, viola, or baroque violins.
3 of 10 photos
String duo
York
Public liability insurance of £1 million
Verified profile

2Baroque is a professional string duo based in London and York. Between them they have studied at the Guildhall School of Music and Drama and Royal College of Music and both have received 1st Class Honours degrees from the University of York specialising in performance. They have played in leading groups and ensembles such as the Manchester Camerata, London Handel Orchestra, I Fagiolini and Orion Orchestra of the Rising Stars. They were both prize winners at the York Concerto Competition and both were awarded the prize for ‘Outstanding Contribution to the Music Department’ and ‘Outstanding Contribution to Symphony Orchestra’ during their time at the University of York. They have worked together for many years and during this time have performed in events from weddings and parties to charity events at Buckingham Palace in the presence of Princess Anne. We perform a wide range of repertoire to suit any events from Bach to the Beatles, and are also happy to arrange any piece that has special meaning to you for a reasonable fee. We both play violin and viola, and one of our members is also an acclaimed oboist and recorder player, so we can offer many different combinations of instruments according to the occasion and music being played. We also are experienced period performers and if required can play baroque violins at your event.

2Baroque were everything we wished for and more during our wedding day. From the very first contact they were extremely prompt, co-operative and thoroughly diligent in their preparations. We chose a very particular selection of music for our ceremony and a range of classical and modern pop music for our reception, but they played it all superbly! Five months later and we are still receiving compliments about our wonderful wedding musicians.

''Angelika and Maxim played for our wedding on 1st July 2017 at York's Merchant Taylor's Hall. Booking them was easy and they just got themselves sorted on the day with the absolute minimum of fuss. We were delighted with how they wonderful they sounded, as well as looking the part for our wedding ceremony. We asked for both classical and popular pieces from their repertoire and we were delighted with their performance of all genres. The duo were also quickly able to adapt to a rather late-running bride, extending their playing with good humour and enthusiasm! We would certainly recommend them to any considering a similar life adventure any time soon.