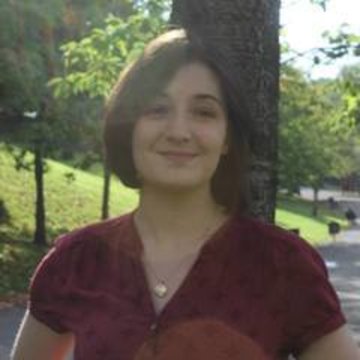 Check availability and get a free quote now - no commitment to book
From£180
About Beth
Home page
Beth Margaret Taylor
Like Beth?
Watch & Listen

singer (Mezzo Soprano)
Scotland
Beth is a freelance vocalist currently in the middle of her Postgraduate degree programme at the Royal Conservatoire of Scotland.

Beth Taylor is currently in her first year of Postgraduate study at the Royal Conservatoire of Scotland, taught under Iain Paton, having graduated with First Class Honours and was awarded the Florence Veitch Ibler Music Prize for excellence in the school of Music. Before this, Beth was the youngest graduate in the UK to be awarded a Diploma in Music from the Open University, aged eighteen. Beth has been involved in a variety of stage, choral and community music settings. Despite her young age, she has been described by many as having “extremely mature, velvet colours” and is well known by professionals and peers for her approachable nature, reliability and her conscientious and professional approach to any task at hand. She is noted for her reliability as an emergency cover artist for even the highest level of professional musicians. She is particularly praised for her interpretations of Purcell, Bach, Handel, Vivaldi, Holst, Britten, Schumann and Gustav and Alma Mahler. Beth enjoys performing regularly as a concert recitalist and a guest soloist across the UK and Europe. At twenty three years old, Beth has already collaborated with many of the UKs foremost professional musicians and is a soloist and ensemble performer for various groups including Dunedin Consort, Sestina, Genesis Sixteen and Kellie Consort. She is a grateful recipient of the Help Musicians UK Fleming Award, a Help Musicians UK Maidment Scholarship in 2017 and is also kindly supported by the Countess of Munster Musical Trust and the South Square Trust. Beth has also been Glasgow's U26 Ambassador Representative for Scottish Opera since 2014, where her passion for opera helps to promote more young people to attend and appreciate operas throughout Scotland. She also has a great interest in the field of ASN music education and outreach work. She was appointed vocal tutor with the Paragon Ensemble in 2014 as a qualified music facilitator for young people with complex additional support needs. She is also a coherent French speaker, having achieved her DELF international qualification in French language in 2015 and is also a user of British Sign Language. As a passionate and sensitive oratorio performer, Beth is highly regarded as a guest soloist by several local choirs including the Bearsden choir, Les Sirenes (BBC Choir of the Year 2012 winner), Dundee Choral Union, Greenock Philharmonic chorus and Troon Chorus. She is also a sought after performer for many events including Glasgow Music Festival (where she recently held the Gervase Elwes Memorial Trophy for best vocal performance). Beth was extremely delighted to win the prestigious Governor’s Recital Prize at RCS in April 2016 and the Elgar Spedding memorial Lieder Prize in 2017. She has participated in masterclasses with renowned artists such as Sarah Connolly, Susan Graham and Sir Thomas Allen. In 2017, she will participate in masterclasses with Dame Emma Kirkby. Operatic roles include Constanza (L’Isola Disabitata, Haydn) dei Lumi, Aninna/Flora (La Traviata, Verdi) and Olga (Eugene Onegin, Tchaikovsky). She made her debut with the RSNO as the Alto Soloist in Mozart’s Requiem in April 2017. Beth will make her international role debut with Opera de Lyon in 2018 as a member of their opera studio