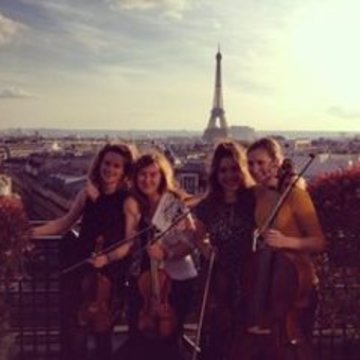 About The Vasara Quartet

The Vasara Quartet was formed in September 2012 at the Royal College of Music, London.
London

Formed in September 2012, the Vasara Quartet is made up of students in their second and third year of undergraduate study at the Royal College of Music in London. In March 2013, the Vasara Quartet was selected to perform in the Wigmore Hall and shortly afterwards they received joint first prize in the Britten Intercollegiate String Quartet Competition. Other highlights include performing for the Prince of Wales as part of the President's Visit at the RCM and giving recitals at the Albert Hall, Kings Place, Draper’s Hall, Lincoln’s Inn, Conway Hall, St Martin-in-the-Fields and Cadogan Hall, London. Last year, the quartet enjoyed a trip to Paris where they performed at the residence of the British Ambassador, and more recently, they performed at Leith Hill Place, the childhood home of Vaughan Williams. They have attended the National Youth String Quartet Weekend three years running where they had intensive coaching from renowned professors including Nicholas Jones, Pavel Fischer, Thomas Riebl and Christoph Richter.