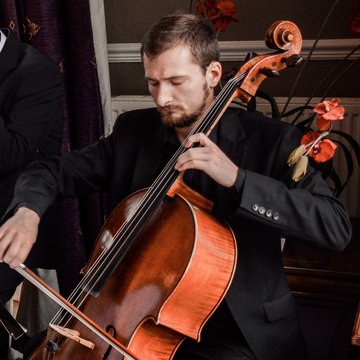 Professional cellist based in Edinburgh and Glasgow.
3 of 19 photos
Cellist
Edinburgh

Tim is a Scottish cellist, singer, teacher and arranger. He graduated from the Reid School of Music (University of Edinburgh) with a BMus (Hons) in 2013, and has since performed across the UK and Europe with many orchestras, ensembles and choirs including the Fyrish String Quartet (of whom he is a founding member), Blackbird Opera, Magnetic Opera, Amicus, Ensemble Alba, Octavoce, the Glasgow Chamber Choir, and the Robin Chapel. Tim teaches cello for East Lothian Council, Merchiston Castle School, and Edinburgh School of Music as well has having a number of private students. He arranges music for string quartet and other ensembles – many of these arrangements are available to buy on Sheetmusicplus. Whilst studying performance, orchestration and stylistic composition at university, Tim was involved in many of the student music societies. He was principal cellist of the string, chamber and symphony orchestras, as well as playing for Edinburgh Studio Opera and the university Footlights. He also sang with the University Singers and was choral scholar at Old Saint Paul’s Episcopal Church. Before university, Tim studied at the Royal Conservatoire of Scotland Junior Department. Tim plays a cello by Noel Sweetman (2000).

I play as a soloist, and in a string quartet (and sometimes trio.)

Just let me know as soon as you can. I always try to be flexible, as I understand circumstances change. The further in advance you can tell of any changes, the more likely I am to be able to accommodate this.

I usually arrive 30 mins before I'm due to start playing. If there are special circumstances, I will arrange to arrive earlier.

I'm happy to play any style of music - let me know if you have any particular requests. I have a wide variety of music ranging from classical to pop to folk.

Yes! Although I will need a chair, but this is usually provided by the venue.

Yes, absolutely! It's your day, so if you would like to hear your favourites song, just let me know!

We just wanted to say a big THANK YOU for your support yesterday evening, You truly captivated everyone in the Upper Library with your impeccable performance in every song and we look forward to working with you again.

Just wanted to email to thank you so much for the beautiful music at our wedding last weekend. It was just how I imagined it and everyone commented on how much they enjoyed it. Thanks also for learning all our requests, it really made the ceremony so special for us. I would not hesitate to recommend you!

Just a note to thank you so much for playing for us in the concert at Pilrig St Paul's on Saturday. It was really great to have you involved and we all appreciated the way that you played the solo cello part so musically.