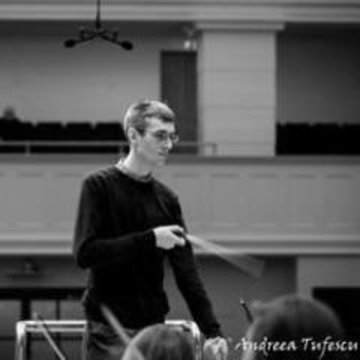 Check availability and get a free quote now - no commitment to book
From£180
About Richard
Reviews
Home page
Richard Miller
Like Richard?
Watch & Listen

Richard Miller is a London-based composer and conductor studying for a Masters' degree at the Royal College of Music, generously supported by the Ralph Vaughan Williams Trust. His composition teachers are Kenneth Hesketh and Simon Holt, and his conducting teachers are Peter Stark and Howard Williams. He has attended the composers’ courses at the St. Magnus Festival (where his choral piece was workshopped by the BBC Singers) and the Dartington International Summer School, where he worked with composers such as Sally Beamish, Alasdair Nicolson, Colin Matthews and the late Sir Peter Maxwell Davies. Last year, his orchestral piece Phlebas was workshopped by the Bournemouth Symphony Orchestra at their biennial Composers Day. In November 2016, Richard was announced as the winner of the Royal Liverpool Philharmonic's prestigious Christopher Brooks Composition Prize. He receives a cash prize of £1,000 and will have his new piece premiered by Ensemble 10/10 (made up of musicians from the Royal Liverpool Philharmonic Orchestra) in autumn 2017. Richard is currently Artistic Director of the St. Cecilia Ensemble and Director of Music at St. Michael's Church, Camden Town. He has previously served as Principal Conductor of the RCM Student's Film Orchestra and, last year, he served as Musical Director of The Infinite Bridge, a multi-disciplinary theatre show premiered in the RCM's Britten Theatre, where he simultaneously conducted musicians in London, Copenhagen and Helsinki.

Richard conducted for a Chamber Choir rehearsal in East Sussex. He was professional and prompt in his correspondence throughout, and the choir very much enjoyed his rehearsal. I would have no hesitations in booking him again.

Richard was able to take a choral rehearsal at the last-minute, and was prompt and professional throughout his correspondence. He took a fantastic rehearsal on the Howells 'Requiem' and Parry's 'Songs of Farewell', and I would strongly recommend him.