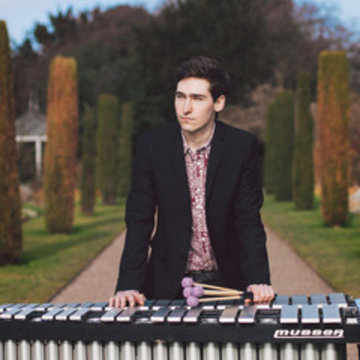 Check availability and get a free quote now - no commitment to book
From£180
Watch & Listen
About Ralph
Reviews
Home page
Ralph Wyld
Like Ralph?
Watch & Listen
1 of 1 video
Yazz Ahmed Trio featuring Dave Mannington and Ralph Wyld at The Cockpit's "Jazz In The Round"

“…his masterful technique is pure delight to watch…” UKVibe, February 2015 || “…set to fire up the jazz scene…” Jazzwise, May 2011
3 of 6 photos
Vibraphone
London
Public liability insurance of £10 million

Ralph Wyld is a London-based vibraphonist, percussionist and composer, whose recent accolades include the Kenny Wheeler Jazz Prize 2015, and the Dankworth Prize for Jazz Composition 2015. A graduate of the Royal Academy of Music jazz course, Ralph is making his name playing original, contemporary music with groups such as Yazz Ahmed's 'Hafla', John Martin’s ‘Hidden Notes’ and Rick Simpson’s ‘Klammer’. In 2014 Ralph formed his own ensemble, Mosaic, for which he composes all the music. Subterranea, the group's debut album, was released on Edition Records in November 2017, and launched at the Cadogan Hall in the London Jazz Festival. The album has been described as an "outstanding debut" (MOJO), and "an example of British contemporary jazz at its finest" (Kind of Jazz). In addition, the band played live on BBC Radio 3's Jazz Now last year, as part of the Sound Frontiers festival at the South Bank Centre. Beyond his own group, Ralph is in demand as a sideman. He currently plays with a wide range of musicians and groups, including Yazz Ahmed, Tim Richards Hextet, Sam Eagles 'SPIRIT', Rick Simpson’s ‘Klammer’, John Martin’s ‘Hidden Notes’, Miguel Gorodi's Nonet, drumless co-op Pacha Yana, and Troykestra, the big band incarnation of Troyka. Through these groups and others, he has played at venues across Europe, including gigs in the London, Berlin, Manchester, Cheltenham, and Lancaster Jazz Festivals. As well as these contemporary jazz groups, Ralph plays with the James Taylor Quartet and recently joined them for residencies at Ronnie Scott's and the Blue Note in Milan. He features on the group’s latest release ‘The Rochester Mass’, which is a suite of music first performed at the Queen Elizabeth Hall for the quartet plus a 40-strong cathedral choir, horns and percussion. Outside of Jazz, Ralph was principal percussionist of the National Youth Orchestra, playing in the BBC Proms – concerts that were broadcast on television and radio. His orchestral playing also led him to tour China and Brazil, performing in the Beijing International Festival and the International Winter Festival in Campos do Jordão. In addition to the Dankworth Prize, Ralph’s compositions have also been recognised through awards such as the National Festival of Music for Youth New Composition Award, and the Sibelius Young Composer of the Year. In 2015 he co-led a project with cellist and composer Cecilia Bignall, writing and playing new music celebrating the 150th anniversary of Lewis Carroll’s ‘Alice’s Adventures in Wonderland’, culminating in a performance at the Daunt Books Literary Festival. His music has been performed in such venues as the Royal Festival Hall, Symphony Hall Birmingham, and Ronnie Scott’s. Ralph is also passionate about education, and whilst studying at the Royal Academy of Music became a Licentiate of the institution in Jazz percussion teaching. As well as one-to-one lessons in percussion and drum kit, he directs percussion ensembles and jazz workshops for students of many ages and abilities. In collaboration with instrument manufacturer Percussion Plus, Ralph produced a series of tuned percussion lessons for ‘Sticks in Motion’, an educational magazine.

[Wyld is] set to fire up the jazz scene…

...vibraphone player Ralph Wyld stood out for his rhythmic accuracy and panache...

...his playing at times is even reminiscent of one of the maestros of the vibraphone Gary Burton.

It’s rare to find a vibraphonist leading the way and Wyld (who’s won prizes for his skill on the instrument and rightly so) does a good job of it.