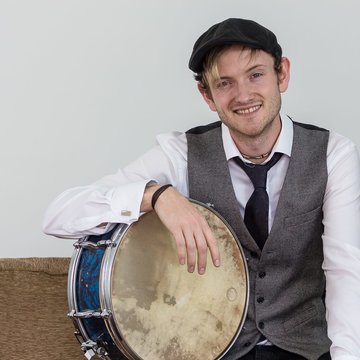 A versatile drummer and percussionist based in Manchester (United Kingdom), Peter's skills in Classical, Jazz, World and Pop music have meant he has had a variety of exciting opportunities across the UK. Playing with artists; including Charlotte Church, The Blossoms, Steve Mason, Mike Garry and Nadine Shah; Peter has gained experience in a wide range of musical styles making him highly sought after as a recording and session musician. Graduating from the Royal Northern College of Music with a first class BMUS means that he is diverse in a wide range of playing styles. He has been able to build and collaborate with an array of different originals projects including the Dynamic Afro-Beat Band Agbeko, groundbreaking GSD Ensemble, the heartfelt alternative indie rock band Ideal Forgery and an exciting percussion duo Gravity Percussion. Being a freelance musician has meant that Peter has had to adapt to a multitude of different ensembles and situations- he is currently the Principal percussionist of the Piccadilly Symphony Orchestra and has recently played on the UK tour of the Award Winning Musical Chitty Chitty Bang Bang. Peter's individual musical voice draws upon creating the most interesting sounds with the widest scope of instruments. “When you’re sitting behind a drum kit or playing percussion, your responsibility is to make the music feel good, by using different intensities of rhythm and sound. I’m forever striving to create new sounds and challenge peoples perception of what a drummer/ percussionist is capable of”

One of the best drummers I’ve ever worked with! Both live and in the studio, Pete is an asset and has the ability to take projects to another level. I couldn’t recommend him more highly.

Peter was my ( very busy ) percussionist on a recent production of Spamalot The quality of his technique , musicianship and professionalism was from the very top drawer and his playing very much added to the standard of the show. It was a pleasure to meet and work with Pete - hope it’s not the last time Wilson Shields