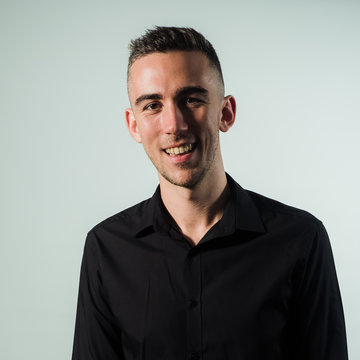 Check availability and get a free quote now - no commitment to book
From£180
Watch & Listen
About George
Reviews
Home page
George Strickland
Like George?
Watch & Listen
Watch
Listen
1-3 of 3 videos
Til I Hear You Sing.m4v
Out Of The Woods Music Time-Lapse
Piano Time-Lapse

George is an MD, pianist and arranger based in Manchester, specialising in Musical Theatre and vocal coaching.
3 of 12 photos
Pianist
Manchester
Public liability insurance of £10 million

George is a musical director based in Manchester. He graduated from the Royal Northern College of Music in 2017 with a Masters degree on oboe. Prior to this, George studied at the University of Leeds. Since graduating, George has focussed on musical direction. George has enjoyed a varied career as a musical director, rehearsal pianist and vocal coach, covering repertoire from musical theatre to church music, opera to popular song. He is currently vocal/repertoire coach at Phil Winston’s Theatre Works and Shockout Arts in Manchester, and has previously worked as a musical director for the RNCM Young Company, StageBox. He has also been a visiting rehearsal pianist and repertoire coach at The Arden, LIPA and other performing arts colleges in the North West. George has performed around the country at venues including Cadogan Hall, Wigmore Hall, The Royal Albert Hall, The Other Palace and the Bridgewater Hall. He also works as an orchestrator and arranger and had had his work performed around the UK. George’s previous work includes Jason Mansford's Christmas Charity Concert at the Bridgewater Hall (Manchester), “An Evening with Rob King” at the Lowry (Salford) and vocal arrangements for Oh! What a Lovely War at the University of Leeds. He has also worked on orchestrations, vocal arrangements and tracks for the UK Tour of “Girls Just Wanna Have Fun” (Red Entertainment). George is passionate about creating and promoting new music. He has been MD/keys, and orchestrator/arranger on many recordings of new works including “(Hey) Jude Taylor”, “Steep Themselves in Night”, “Make Me Infamous” (all by Jude Taylor), “Subway” (by Gus Gowland), and the brand new musical “Bird Brigade" (by Lara De Belder and Luka Bjelis), and performed on “Philip Henderson: From the Old World to the New World” Current/Upcoming Projects: Bette: From Bathhouse to Broadway (Co-writer and Musical Director: Independent), Make Me Infamous (Musical Supervisor/MD), Bird Brigade (Orchestrator/Arranger)

George Strickland is an excellent musical director and brought life, pace andenergy to the both the band and the singing.

George proved to be a first rate rehearsal pianist / accompanist and brought a great deal to our rehearsal process...His playing for rehearsals was always of a high standard. George fitted in seamlessly to the culture of the company, and was well liked by the cast members he worked with. He was equally at ease working with the Musical Director or at rehearsals where the MD was absent - this is a real asset in a rehearsal pianist. As well as playing from the keyboard George showed his musicality with a number of thoughtful contributions to the rehearsal process, while never being unnecessarily imposing. We will definitely be working with George again!