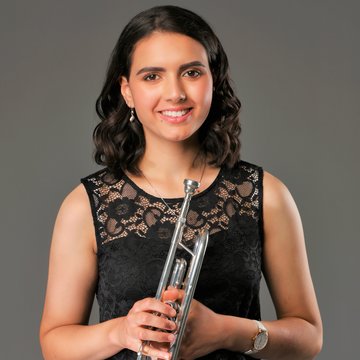 Trumpeter and Conductor on the 'Joint Course' at RNCM and Univeristy of Manchester.
3 of 16 photos
Trumpeter
London

Zoë, 20, has just finished her 2nd Year studying on the Music ‘Joint Course’ at the Royal Northern College of Music and Manchester University. She is studying Trumpet under the tutelage of John Miller and conducting with Rob Guy and Mark Heron. Zoë has a background of orchestral playing on the trumpet, and was in the National Youth Orchestra, which included performances under Marin Alsop, Sir Mark Elder and at the BBC Proms. She currently holds the principal trumpet position in both Symphonova and the Northern Philharmonic Orchestra. She has appeared at Ronnie Scott's Jazz Club supporting Bobby Shew and has performed with Pete Long and the RNCM Big Band. Solo performances include Haydn’s Trumpet Concerto with Watford Youth Sinfonia in 2015, and the Arutunian Trumpet Concerto with her school orchestra. Zoë frequently accompanies other students recitals on the piano, and has performed Finzi's Eclogue for Piano and Strings at Chelmsford Cathedral. As a singer she has performed with the Rodolfus Choir, RNCM Chamber Choir and BBC Proms Youth Choir. As the founder and director of the Wyatt Sinfonia, she recently led them through ambitious programmes including Mozart’s Requiem, the UK premiere of Pejačević’s Symphony in F# minor and the full ballet of Ravel’s Daphnis et Chloé. As one of the University of Manchester student conductors, she has enjoyed working with the university’s Symphony Orchestra, Wind Orchestra and Chamber Orchestra. She musically directed the university’s production of Spring Awakening.

Zoë Kundu is a very exciting young conductor. She combines a high degree of technical excellence with an engaging warmth of manner in a uniquely winning blend.