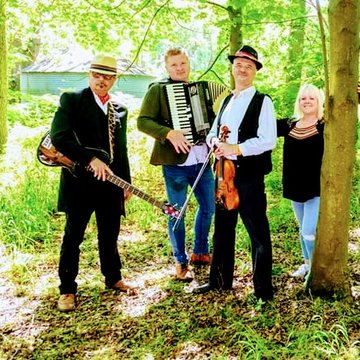 Zingaro Blue (Zingaro means Gypsy in Italian) was founded in 2015 by Singer/ songwriter Lesley Neesham and violinist Mario Price. Mario and Lesley first met in 2011 after collaborating on a concept album called ‘The Legend of L’Inconnue’ which was written and performed by local band Mulberry Hawk. After realising how well Mario’s violin and Lesley’s vocals just simply fit together, Mario joined Mulberry Hawk that same year. Due to matters out of their control Mulberry Hawk disbanded in 2013. Lowestoft needed a new band! After a long break Mario and Lesley started writing songs together and have now written over 40 new songs. They also started auditioning a multitude of talented and non talented musicians ;) It was in April 2017 at a Folk evening in Lowestoft, that Lesley spied Mike Flower amongst the many musicians there. She saw the potential straight away and asked him to come for a jam :) Drummer Gary Drew a special friend from years ago had been waiting in the wings for 18 months when Mike joined the band, so all they needed was a good bass player. Entrance Billy Lund Snr, who applied to an ad of Mikes and hit it off straight away with the rest of the gang :) Jamie Drew Jnr, was never very far away. Having a great relationship with his dad, it was just a matter of time before he joined the band. As an excellent percussionist he brings something very special to the team. Richard Bennett was the missing link and with his unique style and the versatility of his musical talents, keyboard and accordion, Zingaro Blue were lucky that he loved their music and wanted to be in the band. Line up Zingaro Blue was finally complete!

We have released 3 albums which can be found on Spotify.
We have made a number of music videos which can be found online
Gypsy Blue
All night long
The Ballad of Amos Beamish
Argentina
The Dark Heart of Dunwich
Toby's Walk
Hush Little Sister
The tale of Louisa Heartwell
Entertain you with the blues
I'm late
The Witches Finger
Dead Or Alive
Humbug Billy
Flip The Duvet

What a fantastic band, thank you for helping us raise so much money.

You are a star act, what a lovely outdoor afternoon of music you gave us

Balkan bands in the UK