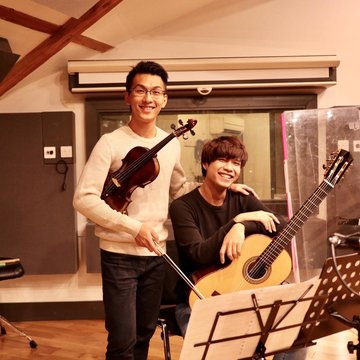 A verstatile duo that consists of violin and classical guitar.
3 of 4 photos
Classical duo
Manchester

Jonathan Law - Violin Jonathanis an experienced event violinist based in Manchester. He had performed for many corporate events such as METRO - Prime Awards For Brand Excellence, UBS – Hacken on Stage with UBS, M Racing Team Gala Dinner along with other companies including Louis Vuitton, Qatar Airways and EF Education. His public appearance on stage includes a 2 months event Springtime with Love in 1881 Heritage; Play Me I’m Yours in PMQ initiated by British Artist Luke Jerram; Supernova Stage in K11; Bubble up – Evening Buskers in Harbour City; Music Geographic and Music in Town in Shatin New Town Plaza. He also performed in the closing ceremony of IFX Expo, the largest financial B2B expo in the world. Born in Hong Kong, Law started music training in Hong Kong Academy for Performing Arts Junior Music Program. At the age of 13, Law made his debut in New York Weill Recital Hall at Carnegie Hall after capturing the second prize in Hong Kong Generation Next Arts Piano Competition. Law had captured numerous international awards including champion at both the Princess Galyani Vadhana International Competition Piano Trio group and Chiang Mai Ginastera International Music Festival Open category. Law is now pursuing the Master of Music in Performance at the Royal Northern College of Music. Julian Liu - Guitar Born in Hong Kong and educated in England from the age of 14, Julian is an active classical guitarist currently undertaking a Master of Music in Performance degree at the Royal Northern College of Music, studying with internationally renowned guitarists Craig Ogden, Rory Russell (Aquarelle Quartet), and Tom McKinney. Prior to entering the RNCM, Julian undertook a Bachelor of Arts degree in Music at Keele University graduating with First Class Honours, and scoring 90 in his final year recital. While completing his undergraduate study, he has received the Elizabeth Montford Instrumental Scholarship for two consecutive years, and on graduation received the Jim Roberts Memorial Prize. Some of Julian’s highlight performances include Vivaldi’s Lute Concerto with the Keele Philharmonic Orchestra as soloist, and a solo recital for the Classical Cleveland Recital Series in March 2019, which was reviewed by the newspaper Darlington and Stockton Times - “Julian’s rendition of the piece was nothing less than beautiful”(on Julian’s performance of Chaconne in D Minor by Bach). Julian has also reached the finals in multiple competitions, including the Leicester MusicFest Guitar Competitions and the Ivor Mairants Guitar Award. He has participated in masterclasses with world-acclaimed guitarists, including Xuefei Yang, Gary Ryan, Julian Byzantine, and Zoran Dukic.

We will try our best to be flexible to help ensure your event runs as smoothly as possible.

30 minutes, and we will aim to arrive 45 minutes before the event begins.

Yes we will try our best to satisfy your needs.

Thank you so much for playing at my Celebration Dinner last night! The sound of your guitar, and the music chosen, created a wonderful ambience in the Great Hall, which was commented upon by many of the guests. I am so pleased that you were able to join us; it made the occasion even more special for me and I shall always remember it.

Beginning with a fairly dramatic, yet restrained, opening section, which he performed with the level of confidence associated with a player of greater maturity, Julian then launched into what could be described as a veritable musical tour de force.