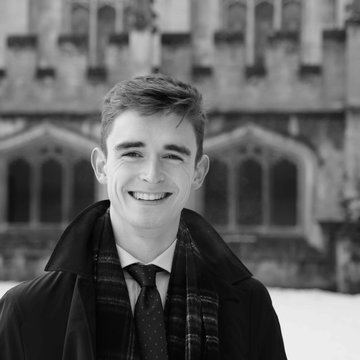 William Fox has been the Sub-Organist of St Paul's Cathedral, London, since July 2018. Appointed to St Paul’s at the age of 21, William takes a share in the organ-playing and conducting of statutory and special services there. He is also actively involved in the education of the choristers and the delivery of the Music Department’s extensive outreach programme, and he curates the year-long weekly organ recital series. Since January 2020, William has also been a Junior Fellow at the Royal Birmingham Conservatoire. Born in Yorkshire, William's musical education began as a chorister at York Minster, before organ scholarships at Wells and Hereford Cathedrals. Prior to his appointment at St Paul's, he was Organ Scholar and an Academic Scholar at Magdalen College, Oxford, from where he graduated with a First-Class degree in Music. While in Oxford, he studied the organ with Stephen Farr and Matthew Martin. As well as playing for several CD recordings, tours, and broadcasts with Magdalen College Choir, he directed the choir during an interregnum term. William became a Fellow of the Royal College of Organists during his gap year, winning the Turpin and Durrant prize for playing. As an organist and continuo-player, his playing has been broadcast on BBC Radio 3 (including an interview on In Tune), BBC Television, and Classic FM. As an accompanist, he has played through much of Europe and in the USA. He currently studies the organ at the Royal Birmingham Conservatoire on the Personal Study Programme. As a piano accompanist, he is the winner of the 2018 Sir Anthony Lewis Memorial Prize Competition, held at the Royal Academy of Music. Recital venues in 2019 included Westminster Abbey; the cathedrals of Bradford, Lichfield (Festival appearance), Newcastle, St Paul’s (Festival appearance), Truro, Westminter (R.C.) and Worcester; Christchurch Priory; The Queen’s College, Oxford, and Marlborough College.

Once again I am getting in touch to thank you for sharing your incredible talent as an organist, and to thank you for investing your time and energy in to making last week’s organ recital such a memorable event. We have had fantastic feedback from guests who attended, not to mention several donations at the recital, with more pledged in time to come.

Just to thank you yet again for your wonderful contribution to the service yesterday. The sortie was just the icing on the cake!