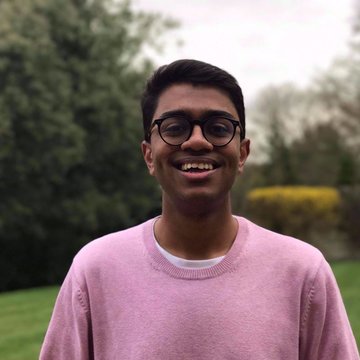 Singer (bass)
Kingston upon Thames
Public liability insurance of None
Vivek Haria is an undergraduate Music student at the University of Cambridge.

Vivek is an 18 year old Bass currently studying for a Music degree at the University of Cambridge. Vivek is also an avid composer and has had his works performed by Marie Sato (Woodwind Category Finalist of the BBC Young Musician Competition 2016 and 2018) as part of the Winchelsea Arts Festival 2017, The Vasara Quartet (an award-winning String Quartet at the RCM) and the Parry Voices (the flagship choir of the RCMJD). He studied Composition with Jonathan Pitkin at the Royal College of Music Junior Department and also had the opportunity to discuss his work with internationally renowned composers including Mark Anthony Turnage, Michael Finnissy, Dr Harris Kittos and Gregory Rose. His solo flute piece, 'Bansuri' was recently shortlisted in the BBC Proms Inspire Competition 2017, with the judges being "impressed with his piece and the skill and imagination that he showed for such a young composer." His work was also highly commended in the RCMJD Joan Weller Composition Prize 2018. Vivek won the John Wills Writing Competition held at the Junior Department in 2015 for his piece on ‘The Evening Song’ from Phillip Glass’s Opera, ‘Satyagraha’ and in 2017 for his writing about ‘Ubi Caritas’ for SATB Choir by the Norwegian-American composer, Ola Gjeilo. Vivek attended Kingston Grammar School, where he was a Senior Academic and Music Scholar. He led the orchestra since the age of 15, involving performances at The Rose Theatre and St Mark’s Church in Surbiton. Vivek led Piano trios and String quartets at Kingston Grammar and participated in workshops and master classes with the renowned ‘Maggini Quartet’ on an annual basis. He was Bass section leader in the School Choir and Chamber Choir and has had the opportunity to sing solos in Salzburg Cathedral, St Peter’s Basilica (The Vatican) and The Church of Santa Maria Maggiore, Rome. He has also performed in Oratorios such as Mozart’s Requiem, Mendelssohn’s ‘St Paul’, Brahms’s, ‘Ein Deutsches Requiem’ and Carl Orff’s ‘Carmina Burana’ under the direction of Moritz von Freyhold. As part of the RCMJD Chamber Choirs and Parry Voices, Vivek sung twice at the Royal Albert Hall and at the Carpenters Hall for an annual charity fundraising Gala in the presence of the Patron of the Construction Youth Trust, HRH the Duke of Gloucester. He also took part in the premiere of works by distinguished composers with the Chamber Choir and Parry Voices, including Gabriel Jackson, Gary Carpenter and Nikolas Labrinakos. Vivek’s own setting of 'Ubi Caritas' was premiered by the Parry Voices in June 2017 as part of the Junior Department’s Choral Concert. Vivek is regularly invited to sing with the Vigala Singers (a choir formed of alumni of the RCMJD Chamber Choir), conducted by Joy Hill. He has been able to perform with the Choir in venues such as St James’s Piccadilly (as part of their ‘Carols for Shoppers’ and ‘Holy Week’ services) and was invited to tour with them to Hungary in July 2016 as part of their residency at the Kodály Institute in Kecskemét. In February 2018, Vivek had the privilege of participating in a Vocal Masterclass at Kingston Grammar given by the renowned British Baritone, Roderick Williams.

I had an opportunity on 19th May 2017, at the Soroptimist International 90th Anniversary Dinner, to hear Vivek perform in front of 100 guests. He sang with confidence, joy and maturity. The performance was so well received by the guests that it became the highlight of the evening. Well done Vivek and best wishes for the future!

I must congratulate Vivek. What a lovely idea to have a talented young man to entertain us! I was impressed with how both his voice and technical expertise have developed since I last heard him perform. He’d selected an interesting and varied programme showcasing his talent, and closing with the drinking song was a super touch of humour. It added to a special evening and it was a privilege to have been part of it.

His range of repertoire was excellent and showed great ability to navigate a range of vocal styles. We were particularly impressed by the incredibly engaging approach he brought to each of the works, which were delivered with utterly compelling conviction and emotional involvement. It was a performance to be remembered from a singer who clearly has a great potential!