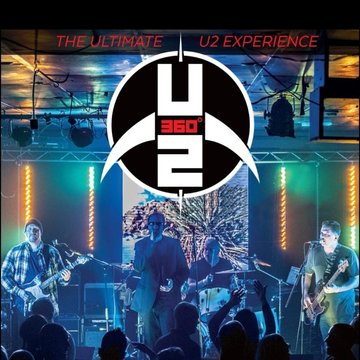 About U2-360 The Ultimate U2 Experience

U2-360 are the ultimate U2 experience with more than 20 years experience in the business.
3 of 4 photos
1980s era tribute band
Coventry
Public liability insurance of £5 million

U2-360 are the ultimate U2 experience with more than 20 years experience in the business. Each member has spent years honing their craft to portray one of the worlds biggest rock bands with precision. From visuals to guitar tone - sequenced lighting to intermission video, U2-360 recreate all aspects of a U2 live performance. Fans have said that U2-360 are a real Fans band and that the band are the closest thing you’ll get to that real live U2 rock sound and performance. The band have options for different sized venues and have flexibility to suit any budget.

Yes, we can provide a small show (pub show) with back line only up to an hour and a half set. We can also provide our full 2 hour minimum show including the above plus lighting and HD video. Acoustic sets are also possible

We are flexible, just let us know and we’ll work to suit your requirements.

Yes at an additional cost

Yes, Singer, guitarist and bassist frequently roam around the venue when possible as we are all wirelessly connected.

Our show allows some flexibility to move songs around.

All equipment is included in our set prices except for PA and engineer, if required.

Yes, however we require time to build the show and theme around the song to include costume changes as well as lighting and video programming.

Our sound and performance. We have the closest matching equipment to what U2 use themselves from vintage amplifiers to FX units and themed lighting and video. Our audience frequently comment on how great and accurate we sound and how energetic our performance is. We always get people up to dance.

Hey guys just wanted to congratulate you on a great night at The Mansfield last night. I consider myself a massive U2 fan having seen them over 15 times and I’ve done my fair share of seeing tribute bands taking on the challenge of doing them justice. Consider myself a tough audience as there is nothing worse than a U2 song which I treasure being tortured by mediocre attempts. I sound tough I know lol. I was initially apprehensive as I hadn't seen you guys before, but I have to say you won me over. It's clear you all know your stuff, band were all awesome and any glitches you pulled off really well. Anyway, well done, it was a top night, hope to see u local again soon? Paula

Fantastic session at Alexanders tonite lads, amazing visuals and stage set, takes a lot of work to be so true to the real thing and you pulled it off. Really enjoyed the ‘satellite stage sessions’ through the audience and bar, moved the place up another gear. A night to remember, look forward to seeing you again, Cheers

Had a great night, fab band can't wait for the next gig x

My partner and I came to watch you at the King Billy in Northampton. We are both fans of U2, although it's fair to say that I am the serious fan. As such I would thank you for putting together such a comprehensive and entertaining show. I loved that you lifted and recreated segments of U2 gigs like the Zoo TV and Popmart tour in such detail. Having watched my gig DVDS to death over the years I knew what I was looking for, and you didn't disappoint. Thank you also for playing some of the less well known tracks like MoFo and Electric Co, which remains one of my favourite U2 tracks. At the risk of sounding like a crazy person I will finish by saying that you are a real fans band. A very authentic sounding band which gives a proper U2 gig. Thank you for a thoroughly entertaining evening