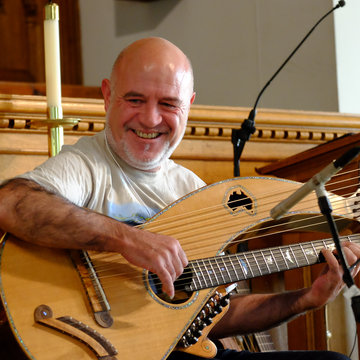 3 of 6 photos
Guitarist
Carshalton
Tony is an acclaimed Jazz Guitarist and Harp Guitarist, who plays most styles. Perfect for any event, Corporate, Weddings, Bars, Concerts.

JAZZ AND LATIN
On a clear day,
Sweet and Lovely,
My Romance,
Gravy Waltz,
Cherokee,
Just Friends,
There is no greater love,
All the things you are,
Bluesette
My Favourite things,
Days of Wine and Roses,
In a Mellow Tone,
Out of Nowhere,
I Love you,
Meditation
Wave,
All of me,
Jordu,
I’m getting sentimental,
I thought about you,
Move,
How high the moon,
Polka dots and Moonbeams,
Misty,
Ornithology
The nearness of you,
Easy Livin’,
Oleo,
Recordame,
Squeeze me,
There will never be another you,
Airmail special,
Stompin’ at the Savoy,
Bernie’s tune,
Body and soul,
Boulevarde of broken dreams.
Broadway,
Corcorvado,
Darn that dream,
This can’t be love,
Early Autumn,
Little boat,
I let a song go out of heart,
Yesterdays,
It had to be you,
Have you met miss Jones,
A Foggy day,
It’s you or no one,
Georgia,
Girl talk,
Groovin’ high
Here’s that rainy day,
Laura,
I’ll remember April,
Lullaby of the leaves,
If I had you,
Lullaby of Birdland,
No Moon at all,
Robin’s nest,
When you wish upon a star,
One note samba,
‘Swonderful,
Pick yourself up,
Black Orpheus,
St Thomas,
When sunny gets blue,
The Way you look tonight,
Topsy,
Green sleeves,
Waltzing Matilda,
Billabong
,The Glittering Caves,
Mangled Tango,
Bilby Waltz,
Botany Bay,
If Kangaroos could dance,
Goanna, Kookaburra,
Blue Mountains Bossa,
Barney’s Waltz,
Eucalyptus Dream,
Allegro,
Adiemus,
Norwegian wood,
Lester leaps in,
Bluesology,
Django,
Danny Boy,
Triste,
Nature Boy,
Prelude to a kiss,
Take the A Train,
Afternoon in Paris,
Moonglow,
Undecided,
Autumn Leaves,
Bags groove,
Billie’s bounce,
Blue Monk
But Beautiful,
Con Alma,
I wish I knew how it feels to be free.
Don’t get around much anymore,
We shall not be moved,
Doxy,
Emily,
The Preacher,
Four brothers,
Fire and rain,
Mr Bojangles,
Flintstones theme,
Four,
Friends again,
Girl from Ipanema,
I remember you,
On Green Dolphin street,
I can’t get started,
Inchworm,
How could you do a thing like this to me,
I’m beginning to see the light,
Lady be good,
Li’l Darlin’,
Love for sale,
You and the night and the music ,
Song for my father,
Minha Saudade,
Batida Differente,
Samba de Orfeu,
Mood Indigo,
Moonglow,
Mr PC,
Moonlight in Vermont,
My Old Flame ,
Old Devil moon,
Old Folks,
Scrapple from the apple,
Satin Doll,
Seven come eleven,
Shiny stockings,
Winter,
Softly as in a morning sunrise.
Sweet Georgia Brown,
Tea for two,
There’s a small hotel,
Watch what happens,
Work song,
What is this thing called love,
Yardbird suite
CLASSICAL; A wide range of pieces from Baroque to Contemporary
HARP GUITAR;
Home Grown Rainforest
When you wish upon a star
Over the Hills and Far away
Adagio
Hedwig's Theme
Concerning Hobbits
The Mantle of Dreams
Philae Landing on a comet
Mist and Stone
Voyager
The Gatherers
Winter
Erin's Song
Invention 11
Erika's Song
Far Away Home
Year One
Southern Skies
The Nearness of You
Summertime
Blue Moon
Autumn Leaves
Hymn for Australia
Me and Erin, Meanderin'
Alone
Hooray for Mr Hay (Harp Ukelele)
Musing
Emerson
Watersong
Pearl Beach
Out of Sight, Out of Mind
Goanna
Rentman blues
and a wide range of other music is available
Beatles songs
Christmas songs
requested songs
Customer questions

In most cases I am open to negotiation. Shouldn't be a problem, except for perhaps date changes.

I can provide an Ipod to play during breaks

not Longer than 30 minutes

Yes you can. I can also provide any requested tunes that are not on my lists. I know hundreds of tunes in many styles

Yes I can. I will need advance notice so I am well prepared before the event

I always engage with the audience, I am professional, friendly and play with passion, energy

Barney Kessel, Herb Ellis, John Williams Keith Emerson and too many to mention

Dear Tony. Thanks for all your help and talent at Hever Castle. Hope to see you again, Love Gloria

Dear Tony. Thank you SO much for your incredible playing(both Solo and with Mr Mullen) at the wedding. We really feel pivileged to have had such great music at the reception, and we've had lots of favourable comments from the guests. they loved it. Thanks again

I have known Mr Tony Barnard professionally since 2002. During that time, he has constantly impressed me and all my colleagues with his consistently high standards and seemingly boundless musicianship. A valuable member of any ensemble, Mr. Barnard brings even temperament and good humour to any task put in front of him.

Dear Tony. I wanted to personnally congratulate you on your fine performance at the Jazz Families concert at the Sydney Town Hall. and for your generosity in assisting the breakthrough programme in this way. The Evening was not only very enjoyable but financially successful as well, raising funds towards our project of helping runaway and homeless youth of this city. Your contribution is greatly appreciated. Once again many thanks for your support.