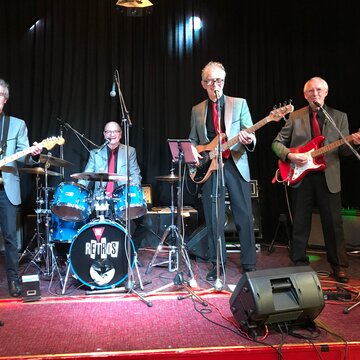 The band's passion and obvious joy in the music is clear in their live act and their recordings - probably the best party band in the world!
3 of 29 photos
Function band
Hounslow
Public liability insurance of £10 million
Verified profile

The band's passion and obvious joy in the music is clear in their live act and their recordings. In addition, all of the band members are lead vocalists, enabling them to offer a range and depth of material that few other bands possess. In recent years, Go Go dancers have joined the band on stage, giving an exciting reminder of why the music of the 50’s , 60s , and 70s provided so many people with so much pleasure! In order to please wedding and corporate audiences the band has added some favourites from later decades including ..... (Titanium , Hey-Ho , MrBrightside, Teenage Dirtbag , Somebody That I Used To Know , Viva la Vida, I Will Wait and Dakota as examples of more recent tracks.) The current line up is: Paul Aitken (drums and vocals) Ben Grove (rhythm guitar and vocals) Steve Morley (bass guitar and vocals) Gordon Sellar (lead guitar and vocals) We have played at Weddings , Corporate functions , Parties and Festivals all over the UK ( and abroad) In the Beginning...The Retros started officially in 1985 but have roots going back to Precious Little in 1975 and The Banned in 1977 ( TOTP + The Charts). Paul Aitken, the drummer/vocalist in these bands, started a new band from scratch, inspired by the material he had known and loved when he was a kid. As interest in the band quickly grew, the band became THE RETROS and the line up changed to: Paul Aitken (drums) and Peter Pontzen (keyboards), joined by two chums from the days of Precious Little: Ben Grove (rhythm guitar) and Graeme Taylor (lead guitar) plus Steve Morley (bass guitar). Life for this line-up began in 1986 at a recording session, which was also videoed, in a rehearsal studio near Blackfriars. The sound of the new band was very authentic with a fresh and exciting delivery. . The Retros proved very successful, playing for large parties and corporate events being booked by Gordon Poole , Mecca and JLA.This success led to the recording of their first album called ' Strings and Skins' and a single ' Pour Your Love' at the end of 1992. By this time Peter had left the line up and Graeme Taylor also left to return to his folk roots in The Albion Band. As luck would have it, Grahame White (Capability Brown.) was available to take over the lead guitar. An excellent vocalist, Grahame added a new dimension to the band - his guitar technique and vocal strengths further added to the the ability of the band to respond to unrehearsed requests! The band released a live album “Undercover” in 2003 and also had a couple of single releases with all the recordings to date being put on itunes by Cherry Red Records. Grahame tragically died in 2010 and his role was taken over by Gordon Sellar –(Beggars Opera , Alex Harvey Band and Freddie Starr’s Band) Gordon had been depping in The Retros for ten years so was a perfect fit.

SONG LIST 2019
Beatles, Kinks , Stones, Spencer Davis, Soul, Motown, Blues
Van Morrison, Ed Sheeran ,George Ezra , Elvis , Stereophonics , The Killers and many more...
Acoustic or Electric
ACT NATURALLY
A HARD DAYS NIGHT
ALL OR NOTHING
ALL DAY AND ALL OF THE NIGHT
ALL YOU NEED IS LOVE
ANOTHER SATURDAY NIGHT
APACHE
AS TEARS GO BY
AUTUMN LEAVES
AT LAST
BABY ITS YOU
BABY COME BACK
BAD TO ME
BIRTHDAY
BLACK MAGIC WOMAN
BOBBY MCGEE
BORN TO BE WILD
BROWN EYED GIRL
BROWN SUGAR
CANT EXPLAIN
CAN'T GET ENOUGH
CAN'T HELP FALLING IN LOVE
CAN'T TAKE MY EYES OFF YOU
CAROLINE
CHAINS
CISSY STRUT
CONCRETE AND CLAY
C'MON EVERYBODY
DANCE THE NIGHT AWAY
DAYS
DOCK OF THE BAY
DOO WAH DIDDY
DO YOU WANNA DANCE
DREAM DREAM DREAM
ELENORE
EVERYDAY
EVERY BREATH YOU TAKE
EVERYBODY NEEDS SOMEBODY
F.B.I
FIRE BRIGADE
GET BACK
GET READY
GIMME SOME A LOVIN`
GOOD LOVING
GREAT PRETENDER
HAPPY TOGETHER
HEARTBEAT
HELP
HEY JOE
HERE COMES THE SUN
HI HO SILVER LINING
HIPPY HIPPY SHAKE
HIS LATEST FLAME
HONKY TONK WOMEN
HOMEWARD BOUND
I CAN SEE CLEARLY NOW
I CAN'T EXPLAIN
IF I FELL
I FOUGHT THE LAW
I'M A BELIEVER
I'M INTO SOMETHING GOOD
IN MY LIFE
I SAW HER STANDING THERE
I SHOULDA KNOWN BETTER
I WANNA HOLD YOUR HAND
ITS ALL OVER NOW
IT’S NOW OR NEVER
JUST ONE LOOK
JAILHOUSE ROCK
JOHNNY B. GOODE
JUMPIN` JACK FLASH
KEEP ON RUNNING
KITES
LA BAMBA
LET IT BE ME
LETTER, THE
LETS TWIST AGAIN
LET'S SPEND THE NIGHT TOGETHER
LETS DANCE
LITTLE SISTER
LISTEN TO THE MUSIC
LOCOMOTION
LOLA
LOVE GROWS WHERE ROSEMARY
LOVE IS ALL AROUND
LOUIE LOUIE
MAKE YOU FEEL MY LOVE
MERRY CHRISTMAS EVERYBODY
MIDNIGHT HOUR
MISERY
MR TAMBOURINE MAN
MONEY
MOANY MOANY
MOON RIVER
MOVE IT
MR BRIGHTSIDE
MUSTANG SALLY
MY GIRL
NADINE
NEED YOUR LOVE SO BAD
NEEDLES AND PINS
NO MATTER WHAT
NOT FADE AWAY
NOWHERE MAN
OH CAROL
ONE MAN BAND
PAINT IT BLACK
PEGGY SUE
PEGGY SUE GOT MARRIED
PLAY THAT FUNKY MUSIC
PLEASE DONT TEASE
PRETTY FLAMINGO
PRETTY WOMAN
PROBLEMS
PROUD MARY
PURPLE HAZE
RED RED WINE
RIP IT UP
ROCKING ALL OVER THE WORLD
ROCK AROUND THE CLOCK
ROUTE 66
RUNAROUND SUE
RUNAWAY
SATISFACTION
SAN FRANCISCO BAY BLUES
SAVE THE LAST DANCE
SEA CRUISE
SLOW DOWN
SHAKIN ALL OVER
SHE LOVES YOU
SHOORA SHOORA
SIMPLY THE BEST
SOMEBODY THAT I USED TO KNOW
SLOOP JOHN B
SOMEBODY HELP ME
SO SAD 'BOUT US
SOUL MAN
SONG2
STAND BY ME
STAY
SUBSTITUTE
SUFFRAGETTE CITY
SUMMER IN THE CITY
SUMMERTIME
SUMMERTIME BLUES
SUNSHINE OF YOUR LOVE
SWEET CAROLINE
SUSPICIOUS MINDS
SWEET HOME ALABAMA
TAKE IT EASY
TENERIFE SEA
TEENAGE DIRTBAG
THE LAST TIME
THE WEIGHT
THAT'LL BE THE DAY
THIS BOY
TITANIUM
TRACKS OF MY TEARS
TRUE LOVE WAYS
TWIST AND SHOUT
TWISTIN` THE NIGHT AWAY
UNDER THE BOARDWALK
VENUS
VIVA LA VIDA
YOUR SONG
WALK IN THE ROOM
WALK DONT RUN
WALKING THE DOG
WATERLOO SUNSET
WE WISH YOU A MERRY XMAS
WHAT `D I SAY
WHEN WILL I BE LOVED
WHERE HAVE YOU BEEN?
WILD THING
WIPEOUT
WHITE ROOM
WHITE XMAS
WONDERFUL WORLD
WONDERFUL TONIGHT
WORDS OF LOVE
YES I WILL
YOU CAN’T DO THAT
YOU’D BETTER MOVE ON
YOU REALLY GOT ME
YOU'RE JUST TOO GOOD TO BE TRUE
YOUR SONG
YOU SEND ME
ZIGGY STARDUST
Customer questions

Our line-up is as follows: Vocals, GuitarS, Keys, Drums. We also have a 4 piece option.

“Absolutely. This is a really popular request and we actually offer this service for free. If you'd like a DJ service via our PA after the final set until the venue closes, we provide this for an additional £150.”

“Our PA and lighting system is included in your quote. We usually require a minimum of 2m by 3m space to perform”

“If a song isn't included in our song list there may still be a chance we already know it. If there is a special song you'd like us to learn we are happy to do this for you.

We have a wide variety of songs and styles from the 40's up to the present day - we are happy to adjust our volume to suit the event. We enjoy entertaining !

All prices include:PA Equipment , Instruments , Stage gear , and Lighting - also playlists to run during any breaks
Packages
The Retros Duo2 musicians
The Retros Duo with two acoustic guitars and backing tracks. The material ranges from the 40's to the present day including material by George Ezra and Ed Sheeran
£500
The Retros Trio3 musicians
The Retros as a trio with much the same repertoire as the fourpiece.
£750
The Retros plus Gogo Dancers4 musicians
This combination is with the band plus two Gogo Dancers
£1500
NEW!Virtual services
Digital music party
I'll host an hour's entertainment for your virtual party. Includes a 'guess that tune' quiz, personalised songs for your team and other interactive music games! Guaranteed belly laughs!
£250
Bespoke music video
I'll produce a unique music video with professional recording equipment. I can customise the video with your own branding and lyrics!
£20
The Retros

5 out of 5
19 verified reviews
Satisfaction

Excellent performance, would highly recommend Paul and his band, Paul showed outstanding energy and enthusiasm to help me draw up a playlist which didn't disappoint.

A great group every one enjoyed the music would highly recommend

The Retros went down a treat at our event (a 70th birthday party). They were straightforward and accommodating when it came to making arrangements, showed up on time, and played a great couple of sets, perfectly attuned to the audience. I can't recommend them highly enough.

MW
Mike W
4 months ago, for a Birthday party in Newbury

Thanks again for an excellent performance last night ( for Harvey's 21st Birthday Party ), and for your enthusiasm building up to it - with all the planning, Harvey absolutely loved it !! I will definitely recommend you to family and friends.

RB
Rowena B
11 months ago, for a Wedding anniversary in Littlewick Green

" A great night ! Many, many thanks." - said to me after we had finished . And also Sue McCabe on Facebook "We were there. Great night!" (https://www.facebook.com/Retros1)