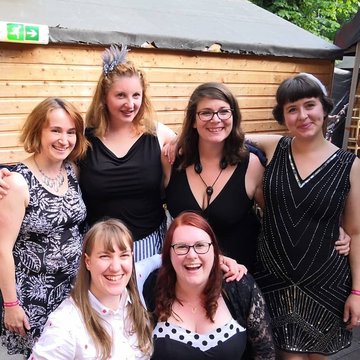 About The Red Hot Rhythm Makers

This all female band, from Central Scotland, has been assembled as a response to Ali Affleck’s pioneering and critically acclaimed ‘Preaching Divas’ project; which focuses on the ground-breaking (and mostly forgotten) women of jazz and blues. Since The Red Hot Rhythm Makers went ‘public’ in summer 2018 they have received rave reviews from very happy audiences. The line up consists of Ali Affleck on washboard and vocals, Ali Tod on guitar and vocals, Danielle Price on tuba and vocals, Kassandra E’Silva on reeds and vocals, Sarah Findlay on trumpet and vocals and Alex Stewart on trombone and vocals. The band provide fun, accessible New Orleans and Mississippi jazz and blues. Their repertoire consists of old American prohibition era folk, hot roots jazz, pre-electric blues, hokum and rather large nods to their Scottish heritage. They also perform some more modern numbers (circa 1940s) and have many original songs being developed as we speak. Swing dancers will love the mixed tempos and brass heavy line up. They are uniquely placed to provide music for swing dance events as they have a swing dancer in their lineup (and rumour has it that some of the other girls are going to be taking lessons!).

After You've Gone
Ain't Got Nobody To Grind My Coffee
Ain't Misbehavin'
All Of Me
Babyface
Bei Mir Bist Du Schon
Bill Bailey
Bourbon Street Parade
Burn That Candle
Careless Love
Charleston, The
Dinah
Dirty Butter
Do You Know What It Means To Miss New Orleans?
Down By The Riverside
Everybody Loves My Baby
Exactly Like You
Gotta Give me Some
Hello Dolly
I Ain't Gonna Give Nobody None O' This Jelly Roll
I Get The Blues When I Rains
I Got A Woman
I Got Myself A Workin' Man
I'm So Blue
It's A Sin To Tell A Lie
Jack, I'm Mellow
'Lectric Chair Blues
Loch Lomond
Louisiana Fairytale
Lovin' Sam
My Daddy Rocks Me
Nobody Knows When You're Down And Out
On The Sunny Side of the Street
Pennies From Heaven
Percolatin' Blues
Please Don't Talk About Me When I'm Gone
Root Hog Or Die
Royal Garden Blues
Salty Dog
Savoy Blues
St. James Infirmary
Stormy Weather
Sweet Georgia Brown
Swing! Brother, Swing!
They're Red Hot
Tight Like That
Weeping Woman Blues
What's The Matter With The Mill?
When The Saints
When You're Smilin'
Wild Women Get The Blues
Yes Sir, That's My Baby
Customer questions

We will be as flexible as possible, please let us know as soon as anything changes and we can take it from there.

Set up times depend on the venue size and equipment available. We can set up in 30 mins for a small event for anything requiring a more extensive sound check 1 hour should be adequate.

We have a large and ever expanding playlist and will be happy to consider requests and favourites within your event.

We do not provide light and sound equipment. For smaller events we can bring our own mics and amp however, for a larger event the venue must have adequate sound equipment.

As stated above, our playlist is ever expanding however, if there is a specific song you want you can request it and we will consider it. I cannot guarantee all requests can be met.

So far we have performed in Edinburgh's prestigious Jazz Bar, Stramash, The Scottish Storytelling Centre (for The Audacious Women's Festival) as well as many outdoor markets and Edinburgh Festival venues.

Standard Prices
6 musicians
Packages
Personalised Music Message
Book me to create a unique music video for you to send to a friend as a gift. This could be a birthday message, first dance song for a wedding anniversary, or just your friend's favourite song to cheer them up.
£15

There is a palpable buzz as the “gals” get ready. There’s no luxury of a dressing room, or backstage. This is the Edinburgh Jazz Bar, the temple of Jazz, and what a place to see Scotland’s six-piece all girl jazz band, the Red Hot Rhythm Makers. Heads turn as a few bars of Duelling Banjos ring out for the soundcheck, and then, after a brief introduction, it’s straight into Royal Garden Blues. Led by Ali Affleck (vocal, washboard, cymbal, woodblock), the show is based loosely on the band’s project, Six Gals Named Smith, all of whom were singing or performing songs through the early years of the 20th century, and Bessie Smith, Trixie Smith, Ruby Smith, Clara Smith, Laura Smith and Mamie Smith, are the inspiration and the source of much of the content, along with some Ma Rainey and Memphis Minne... See the rest of the review at http://www.brasstrapped.com/2019/08/10/the-red-hot-rhythm-makers-percolatin-brilliant/

The Red Hot Rhythm Makers have recently been making a fantastic name for themselves on the Edinburgh live music scene. So when looking for a band that was guaranteed to have the Steampunks jumping at the recent Miss Shelley’s Secret Shenanigans event in Edinburgh, The RHRMs seemed the perfect choice. However, even I was a little surprised and yet thrilled at just how warm the reception the band received from the delighted and utterly enthusiastic new audience. It was truly fantastic to watch folk walk in and yet be dancing by the time they reached the stage. The Red Hot Rhythm Makers superb take on classics from the legendary golden age of Swing is something really special and gives the impression the band has been together for a lifetime rather than just around about a single year. From a promoter’s point of view, the band’s sound is ideal for anything from summer open air gatherings to late night prohibition era style Speakeasies (and all points in between). In addition to being a fantastic live act suitable for almost any event, festival or gathering, The Red Hot Rhythm Makers are also a promoter’s dream regarding equipment needs, set up and sound check. Despite the size of the band, I have rarely witnessed a simpler and more professional set up and de-rig. The band know exactly what they need and just how to get there with no fuss or drama whatsoever. Book as soon as possible ~ Point the way to the stage, leave them to it and sit back and enjoy is my best advice!

I can easily say that The Red Hot Rhythm Makers are one of my favourite bands in Edinburgh at the moment. I work as a Music Curator for an events company called the Pitt and over the last 6 months I've booked them numerous times not only because I love their music but they also are able to play to any sort of crowd in almost any setting. Anything from a chilled and relaxed vibe to upbeat certified bangers to get people dancing, they get the atmosphere just right. The first time I booked them was for a large outdoor food Market during the Edinburgh fringe and within minutes they had captivated the entire audience of around 500 people. Since then I have used them for several events the last being Hogmanay at The Biscuit Factory which they absolutely smashed and had the whole place moving. To top it all off they are all lovely people and very easy to work with. They are number one on my bookings list.