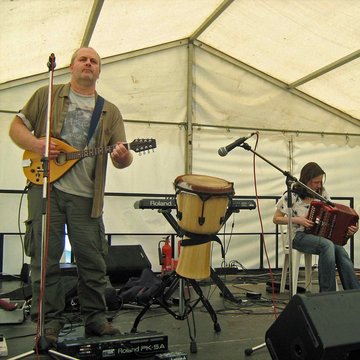 Check availability and get a free quote now - no commitment to book
From£600
Watch & Listen
About
Song list
Reviews
Home page
The Jones Boys
Like The Jones Boys?
Watch & Listen
Watch
Listen
1-3 of 3 videos
The Cook in the Kitchen/The Kilkenny Jig/The Queen of the Rushes
Muiñeira and Canarios
Tam Lin / The Dogs Among the Bushes (Reels)

About The Jones Boys

The Jones Boys play an exciting blend of mostly traditional music from Ireland, England, Shetland, Scotland, Brittany, Sweden, Bulgaria and beyond! The Boys (actually one man and one woman, neither of whom is called Jones!) have been in existence since 2008, originally comprising Gordon Jackson and mandolin player, Ian Carey. They were joined by champion box player, Sam Sloan in 2009 and recorded their debut album 'Like the Sun a-Glittering' in 2010. Ian left later that year to spend more time with his family. The current line up is: Sam Sloan – button accordion, anglo concertina, whistle, keyboards, trumpet and vocals; Gordon Jackson – vocals, octave mandola, mandolin, low whistle, whistle and percussion. The Jones Boys have played many folk clubs and festivals. Sam comes from a long line of Irish traditional musicians, and has been playing music since she was on her mother’s (and her grandmother’s!) knee. She has won over thirty All-Britain and All-Ireland titles as a junior and senior in accordion, melodeon, concertina and mouth organ. She is also a fine trumpet player. Sam has a degree in music and is a teacher and adjudicator for Comhaltas Ceoltóirí Éireann. In 2016 she was awarded the Diploma in Irish Traditional Music Performance by the London College of Music (DipLCM). Sam has been with The Jones Boys since 2009. Gordon has been playing traditional music for over forty years! Hailing from South East London, Gordon has played in a number of bands in folk clubs and festivals. He founded The Jones Boys in 2008. Gordon began playing mandolin and whistle, but these days prefers the larger versions: octave mandola and low whistle. He produces stunningly powerful yet sensitive accompaniments, and is also the band’s main singer. Gordon also teaches a number of instruments, traditional music, music theory and GCSE Music. In 2016 he was awarded the Diploma in Irish Traditional Music Performance by the London College of Music (DipLCM).

ZT
Zoe T
3 years ago, for a Charity event in Epsom Rd

The Jones Boys came and played at our community tree planting event. They were fantastic - lively and jolly music that lifted the spirits of all our volunteers. We received lots of lovely comments about how good the music was. Thank you for joining our event. (Zoe Thomson, Community, Education and Volunteering Coordinator at Trees for Cities)

RF
Ray F
3 years ago, for a Concert in Canterbury CT3 4EB

I would like to thank The Jones Boys for their great contribution to our festival. On an unusually cold and wet day amidst our incredibly hot summer, when the acts had persevered in a marquee with an audience who had to put up with rain and cold all day and were on the wane, The Jones Boys came along like a breath of fresh air. They finished the day off with a mix of music, ranging from toe-tapping tunes to quirky, humorous songs. The virtuosity of Sam’s box playing is without question and Gordon's accompaniment make these 2 a duo well worth considering for booking for festivals and concerts in addition to barn-dances and similar events.