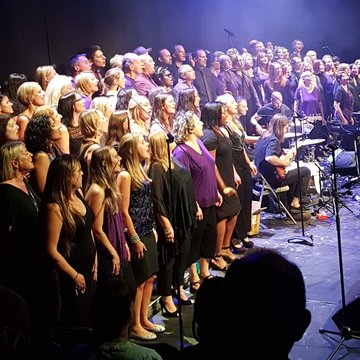 The UK's number one Soul choir as seen at On Blackheath, The Troxy, Camden Electric Ballroom and more. Available from 4 - 200 voices,

UK Soul Choirs group and was founded in 2010 and has performed throughout the country alongside artists such as Lemar and Jocelyn Brown at venues such as The Troxy and Camden Electric Ballroom. They specialise in funky Soul based songs from artists such as Stevie Wonder, Beyonce, The Temptations and many more.... In 2019 the choir performed as part of the Camp Bestival Easter party on Dreamland Margate’s main stage and also performed their own sold out show at The Gulbenkian Theatre, Canterbury and at Underbelly Festival, Southbank. The choir can be booked to perform for events large and small from wedding ceremonies and drinks reception to large scale awards and charity events using from 4 - 200 singers with backing tracks, piano or live band. Nothing is more uplifting than a performance from UK Soul Choirs!

UK Soul Choirs sang for my wedding drinks and it was incredible. Made all my guests totally tear up! Just stunning singing and amazing choice of uplifting songs perfect for the occasion

I just wanted to thank your choir for such a wonderful performances yesterday. We have had such good feedback from staff and clients, and hope that you can come again in the future.