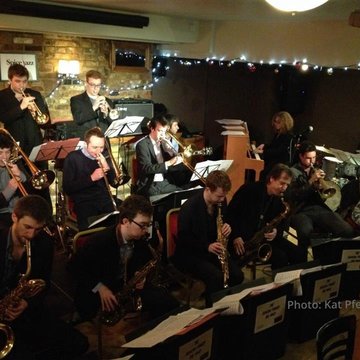 About The Duncan Fraser Big Band

The Duncan Fraser Big Band is an award winning 16 piece ensemble that has been in existence since late 2010 and were voted the best Jazz act of 2011 at the South West Music Awards. The band performs a repertoire of Jazz by composed, transcribed and arranged by Duncan Fraser and draws heavily on the influence and repertoire of the great Kenny Wheeler. In the instrumentation and the writing Duncan has veered away from the standard big band set up, as the band contains the usual reed, brass and rhythm sections augmented by Duncan on Flugelhorn and most notably using Voice as an instrumental part; the contemporary sound created is vibrant, powerful and original. The Band features some of the most talented young jazz musicians in the UK, making this ensemble one of the few professional working groups with this twist. There are influences of Kenny Wheeler in the writing, though the songs clearly have a sound that is very much their own. The works range from fully scored Big Band soli sections to completely free improvisation sections. In Late December 2011 the band recorded it's debut album ("Dealing In Wheeler") with Esteem Records at Smokehouse Studios in London, which features 7 original compositions by Duncan. The Album was released at a fantastic launch party at the Spice of Life Jazz club in Soho, London. Since releasing 'Dealing In Wheeler' the Duncan Fraser Big Band has been active on the London Jazz circuit and has performed at many of London's top Jazz clubs. In 2012 Duncan premiered a new work for Big Band, his 'Yuletide Suite'. This is a collection of 8 Traditional Christmas Carols re-worked for the contemporary Big Band. The band has performed this suite for the past two Christmases at the Spice of Life Jazz club, and it has been an incredible success. It is Duncan's ambition to gain funding to record this work.