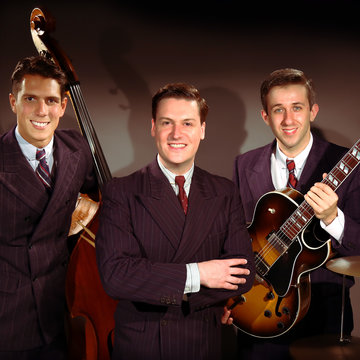 About The Bevin Boys

3 of 4 photos
London
The UK's leading 1940's trio, the Bevin Boys play music to get you swinging. They have performed throughout the world, in movies and on TV.

The Bevin Boys are one of the UKs busiest and much-loved vintage 1940s swing bands, performing at The Royal Albert Hall, Royal Festivals Hall, Isle Of Wight Festival and at International Jazz and swing festivals as well as public and private swing dances and events throughout the UK and Europe. The Bevin Boys are no strangers to TV and film, appearing on BBC The One Show and soon to be featured in a British Pathe film! The Bevin Boys live show authentically evokes the look, sound and atmosphere of the late forties with genuine 1940s vintage instruments and attire - Let us take you back in time! Vocal-led jazz standards and well-known hits of the forties, made popular by The Nat King Cole Trio, Slim Gaillard, and Ray Ellington are The Bevin Boys specialty, with a vast repertoire of music suitable for lindy hop dancing and listening.

I wanted to say how great the show was and how grateful we are for your being so punctual and professional with everything on the day.

It was really a pleasure to welcome you in Coutances. I hope everything is right for you and that your concerts in Normandy for the D Day's 70th birthday are as amazing as the Coutances one."

Really hope we can get you guys in Watford again soon, everyone keeps asking for you back!"

Thanks [to] The Three Belles and the Bevin Boys for your superlative singing and playing last night."

Read all 4 reviews
Company
Discover
Download
Join us on
© Encore Technologies, Ltd.
Crafted with bagels and in London