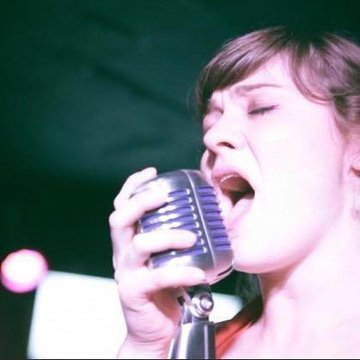 Talia is a Singer/Songwriter/Top-Line writer from East London. She has a four octave range, a 400 song repertoire, a remote studio, is able to learn music extremely quickly and sing and write in a range of genre’s including Jazz, Pop, Rock, Folk and Dance. Her unique tone, and natural stage presence has led to her performing at hundreds of venues and events over the last few years. She fronts two big bands, ‘The Duke Street Big Band’ and ‘The Denmark Street Big Band’. She also fronts a quintet and a sextet, ‘Talia and the John Cervantes Jazz Band’, and 'The Half Moon Band' respectively. She performed on the main stage at Secret Garden Party fronting an Orchestra, with a tribute to David Bowie and on the NTS stage at OnBlackheath Festival supporting Thundercat and Conan Mockasin. She has performed at a wealth of other venues and festivals including, the 10 Downing Street Christmas Party, Ronnie Scott’s, Hippodrome Casino, Scala, Meantime Summer Sessions at the o2, Henley Regatta, Manchester Cathedral, Warwick Castle and St. Martin’s-In-The-Field’s among many others. Music she written played on BBC Radio1, BBC Radio6, Virgin Radio and BT Radio among others. Her music has also been featured twice on the ‘Best Of British Unsigned’ radio show which is aired across the world. She recently collaborated with Turner Prize nominee James Richards on his experimental exhibitions currently being shown world-wide to critical acclaim. She was also recently featured in the Musician’s Union magazine ‘The Musician’. She has also worked with Domino Records, Sony, Big Life Records and EMI. She continue to write Top-Lines from her remote studio or travel to work with a broad spectrum artists and producers spanning a range of genres. Talia has also leant her voice to adverts for Dove, Just-Eat, Selfridges, Twinings and Volkswagen and has featured on adverts for Belvita, Volkswagen Golf and starred in videos for the ASOS Christmas Campaign.

Talia was booked to perform at a Christmas party for 100 older people. She is an excellent entertainer. Her voice is fantastic. She was very flexible, altering her song choices to fit in with the audience. We received lots of positive feedback from the audience. I would highly recommend her to anyone.

Verified
Max B, 2 years ago

I first saw DSBB at the Old Queen's Head last year. They were amazing! Not a hip was left unshook. We danced all evening and I have made a point to see them at every opportunity since.

Verified
Melanie A, 2 years ago

Great night at The Water Rats – the band was amazing and lots of fun; so full of energy, the audience couldn't wait to get up and dance. Playing a good mix of classics and well known songs, as well as contemporary sounds, Duke Street is the must see band for anyone who appreciates good jazz. Great cover of Snarky Puppy by the way guys.

DSBB played a fantastic after-dinner set at my wedding. They are brilliant musicians but more importantly, lots of fun - they got everyone (from the kids to the grandparents) dancing. It made the evening feel really special and my guests still talk about it several years later.

magnetic frontwoman Talia Cohen, who mesmerises thanks to her versatile Janis Joplin-inspired voice that swings from delicate coo to assured snarl to powerhouse howl in a split-second.