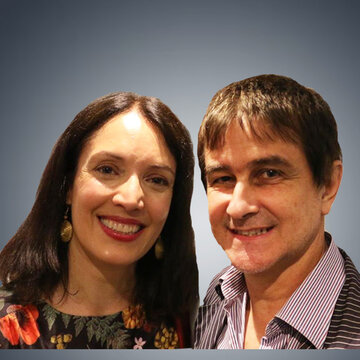 Bossa Nova, Samba and Jazz Trio/Quartet to liven up your event.

TRIO SAMBA JAZZ LUCIA VIOLA Lucia Viola is a versatile flautist and composer resident in London where she graduated at Goldsmiths College — University of London (Bmus Honours, Post Grad Ed). She has been working extensively both as a solo artist and as a member of various ensembles, performing across diverse music genres; from classical through jazz and latin. Lucia has performed in venues such as the Ronnie Scotts upstairs club, the National Theatre , Bolivar Hall, Royal Festival Hall, Flute and piano concerts at P&O Cruises, The Savoy, The Landmark hotel, Claridges and the Ivy Members Club amongst many other prestigious locations. Her debut album 'Sundial' reflects Lucia's eclectic influences, a blend of brazilian music and jazz; it has a a chamber music feel. It features leading guitarrist Mike Eaves, percussionist and composer Chris Wells as well as Lisbon resident bassist Gustavo Roriz. RAFAEL VALIM Born in São Paulo, Rafael is a versatile musician and songwriter. His main instrument is the 7-string guitar, but his ability with the strings encompasses the 6-string guitar, mandolin and cavaco. Rafael has performed solo and with bands in Brazil, Poland, Spain, Portugal, the UK and the Czech Republic. In the UK, he has played in London’s famous Ronnie Scott’s, Apollo Hammersmith, O2 The Forum. He has also accompanied Brazilian stars such as Sombrinha (Fundo de Quintal) and Neguinho da Beija-Flor. KITA STEUER Kita was born in Sao Paulo, Brazil and have studied guitar at Art Livre, trombone at ULM, arranging with Maestro Claudio Leal and bass at Groove School of Music in Sao Paulo. After moving to London, he completed a degree in Music Production and Technology at CM/University of Westminster (BA/Hons) in 2009. While in Brazil, Kita was the Bassist/MD/Arranger for the first Blues Brothers tribute band in the country called Banda Cara de Pau, which recorded a live originals R&B album mainly featuring his original songs and arrangements.The band has played in many TV shows in Brazil and one of the highlights was being invited to open for Ray Charles at Ibirapuera Park for 30.000 people. Kita's work and teaching skills has spanned over a variety of styles such as Pop, Funk, Soul, Blues, Reggae, Ska, Jazz, Latin, Samba, Bossa, Big Band, Klezmer & show bands.

I have been following Trio Samba Jazz for a while now and I always enjoy their performances. They are very professional at their events and have great musicality and variety of repertoire. Well done!

Lucia and Rafael have been playing at the Blue Seas frequently and their performances have been very popular with the public. They have been increasing our audience weekly. I can highly recommend this band.