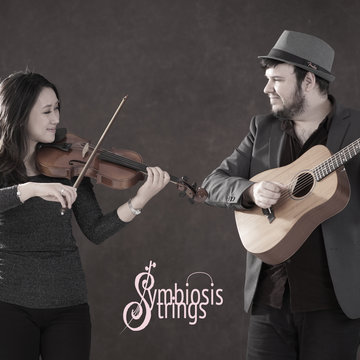 Symbiosis Strings are versatile musicians from different sides of the planet, aims at producing high quality of music to touch the beautiful souls; being innovative with a strong foundation of traditions; creating a new sound by combining different cultures and styles together. We believe that music is an universal language, hope to inspire you through our music journey and to transmit peace and happiness through the beauty of music. Our musical styles include Jazz, Blues, Latin, Brazilian, Pop, Rock and R&B. Our international trajectory has led us to perform in many cities/countries: Paraguay, Brazil, New York, Argentina, Hong Kong, Singapore, Taiwan, China, Japan, Korea, Vietnam, Norway, Poland and Spain. Orlando Bonzi Italian-Paraguayan singing guitarist, composer and producer, with his special voice and unique way of playing has now become the new virtuoso guitarist with a deep musicality in Europe. Brazil is the place that fueled his musical growth, he has played with some of the best Brazilian musicians such as Filó Marchado, Marcelo Mariano, Raúl de Souza and the great singer-songwriter Guilherme Rondon. He later moved to Spain and recorded a collection of his new Jazz compositions, presented international renowned Jazz musicians such as Gary Willis (Tribal Tech), Gergo Borlai, Jeff Ballard and Perico Sambeat. He was recently awarded 2nd runner-up of Lee Ritenour Competition in guitar rhythm. Yanice Tsang Bonzi Hong Kong violinist, singer, arranger and composer, graduated from Berklee College of Music with Master Degree (MM) in contemporary performance and music production, was a classically trained Jazz violinist, former extra member of Hong Kong Philharmonic Orchestra. Her special singing voice on the violin has brought her to tour with various Pop Stars such as Robin Gibbs, Laura Fygi, Chinese King of Pop Jacky Cheung, at venues like Caesar Palace in Las Vegas and Air Canada Centre in Toronto. At Berklee she has collaborated and learned with great musicians e.g. Latin Grammy producer Javier Limón, Fusion bassist Gary Willis and Jazz saxophonist Perico Sambeat. Over 15 years of professional experience, she has led her classical string quartet, jazz band, acoustic duo and string orchestra to perform at numerous major events, concerts and weddings. The brands she has collaborated include: BMW, Rolls Royce, Chanel, YSL, Dior, Frey Wille, etc. She also performed electric violin at the Hong Kong Government House for an art event, and represented Hong Kong to play with Polish electric violinist at World Trade Exhibition in Warsaw, Poland. Last year her Classical string quartet under her group's name Symbiosis Strings was invited to perform for Prince Edward at the Queen's Birthday Party in Hong Kong, organised by The British Consulate-General.

Orlando and Yanice are brilliant musicians, they have played in 3 of our conferences and they carry such excellence. I would recommend both of them to any one who desires to have them play at their events.

Overall, Yanice and her musicians exceeded my expectation. The music during the ceremony was sweet and warm. The music during the dinner was more than just background music as many guests came up to us to tell how good the band was. You guys are true musicians with heart and I can tell that it's not just business as usual. We would definitely recommend you guys without any hesitations for future events.