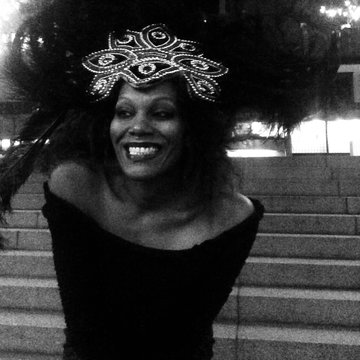 I was born on the French island of Martinique, also known as Madinina, or "Island of Flowers". I first developed a taste for music via dance, whilst growing up surrounded with various cultural influences, in a society where everything is celebrated in Music. In the 1990s, I got involved with Pop singing, whilst studying in Pau, South-West France. I n 1995, I traveled to Great Britain. There, I did various Rock and Jazz circuits, enjoying the buzz of performing. Along my musical path, I encountered a recording by Barbara Hendricks, singing Duke Ellington songs. It was whilst learning that Jazz repertoire that I discovered affinities with my head voice, and top soprano notes. I also found a great affinity with the emotional contents within those pieces. I went on to learn opera arias, and taking Bel Canto lessons, with various accredited teachers. Those include Valerie Saint-Martin, Ivor Flint, and Maureen Millmann. I also attended workshops at various colleges, including Thames Valley University. I took up private tuition, on how to relate to compositions, via the art of singing. I have studied great writings such as the ones of Bach, Mozart, Verdi, Haydn, Bellini, Saint-Saens, Handel... I have also taken part in various London-based choruses, for over 10 years. One of them is the Chelsea Opera group, with whom I have learned to work under different guest conductors and chorus masters. My voice covers 4 and a half octaves, up to a strong TOP F, with nice textures and tones. I am a good and experienced sight-reader. I have a very unique stage presence: a very tall and striking figure. I am also a very versatile actor; please see the relevant page. I have studied languages from age 11, and am extremely fluent in french and in English. I carried on with Latin and Spanish for 8 years, then learnt some more Latin in London for 2 years. I am comfortable singing in German, French, Spanish, Italian, English, Latin. As I grew musically, I also learned composing, and has taken classes on a private basis with Mr Rhys, who increased her awareness about musical structures, an their respective purposes... I am currently developing a commercial career as a classical and crossover singer, across the UK. I am particularly fond of singing in churches. I enjoy writing about music and its effects on the human mind.

I can get in touch with other professionals, as long as sufficient notice is given.

Sandrine performed above and beyond in our music video shoot. She had no problem improvising parts and played a role which fit the vibe and feel of the music.

Verified
Langley I, 4 years ago

Sandrine brought an extra special spirit to my mother's funeral. She fulfilled her role as the singer completely.