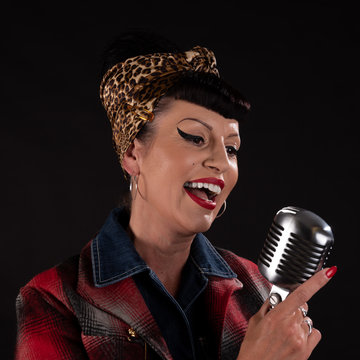 Sammy B - singing songs from the 50s to the 00s from Elvis to Madness to the Stereophonics! Also offers a tribute to Amy Winehouse.

Singer
Walton on the Naze

Introducing Sammy B - looks like she has come straight out of the 1950's with her Bettie Page bangs and retro look. She sings songs not only from the 1950's but also, 60's, 80's and up to present day! One of her niches is that a lot of the songs she sings were originally performed by male vocalists. For example: Elvis, Cliff Richard, Chuck Berry, Buddy Holly. She sings many songs by these artists and gets everyone up dancing! Now also offering her very own tribute to the late great Amy Winehouse.

I play background music during my breaks.

Songs/theme can be discussed as necessary.

Yes provided they are within my vocal range

The fact that most of the rock n roll songs I perform were originally sung by men, ie. Elvis, Buddy Holly, Chuck Berry etc.

Sammy B plays at our club regularly. She is always immaculately turned out. She has a wide range of songs and is always very entertaining. Our members always enjoy her performances and dance the night away. Royal British Legion, Walton on the Naze

Hi Sammy....thank you so much! Your performance was amazing and I have had lots of messages saying how fabulous you were. I've got some video of you so will send it over on e-mail. Will come and see you again soon when I am able to sit down, enjoy a drink and listen properly! Thank you once again xx

We hired ‘Sammie B’ for our anniversary do and she did not disappoint. She was brilliant! Did a variety of songs, looked the part and everybody enjoyed the entertainment. Lots of compliments after from guests so an absolute hit. A very talented lady and have and will continue to recommend. Thank you Sammie ❤️👌

Singers in the UK
Singers in Chelmsford
Singers in Basildon
Singers in Southend-on-Sea
Singers in Colchester
Singers in Rochester
Company
Discover
Download
Join us on
© Encore Technologies, Ltd.
Crafted with bagels and in London