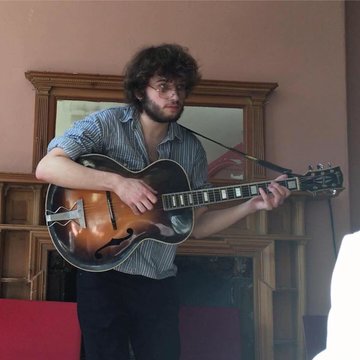 Check availability and get a free quote now - no commitment to book
Watch & Listen
About Sam
Home page
Sam Baxter
Like Sam?
Watch & Listen
1-2 of 2 videos

3 of 5 photos
Singing guitarist
Newcastle upon Tyne
English and Irish folk and traditional songs and fiddle.

Sam Baxter is a performer, interpreter and composer of folk and traditional music. Although his main passion lies in the English tradition, Sam’s broad repertoire consists of songs from all over the British Isles and North America, skilfully paired with sensitive finger-style guitar accompaniment. As well as being a regarded singer and guitarist, Baxter is also talented fiddle player rooted firmly in English and Scandinavian traditions. Raised in the High-Peak of North-Derbyshire, Sam began his music career supporting acts such as Jackie Oates and Jack Rutter at his local folk club to much acclaim. Sam, now residing in Newcastle, is forging a path of his own as a solo performer, having in 2018 won the Bromyard Folk-Festival ‘Future of Folk Award’ singing competition. Currently, Sam is working towards the release of his debut EP ‘Welcome in the Dark’, a collection of traditional songs, which will be released in July of 2019.