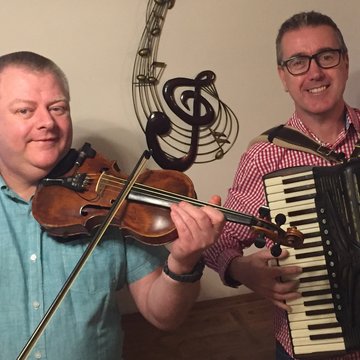 About Roy Hendrie and Dave Morrice

We started in 2012 and play a wide range of music using midi and drum machines to produce a BIG live sound.

We were delighted to invite Roy Hendrie and Dave Morrice to provide a Concert at our Soar Valley Accordion Club, Leicester. Roy has many years experience in performance and technical abilities of various midi sound equipment which was very evident in his performance on the evening. Dave Morrice a very experienced multi-instrumentalist provide some outstanding violin and guitar lead / backing to Roy’s undisputed expertise on the accordion. It was evident from their standard of playing that everyone present enjoyed their various styles of music on the night and a number of their Cds were purchased on the evening. An outstanding concert was provided by Roy and Dave to our Club and we would be only too pleased to re-book Roy and Dave for further performances in the future. David Price - Organiser Soar Valley Accordion Club Rothley, Leicester

On October 31s Roy Hendrie (midi accordion) & Dave Morrice (fiddle and guitar), from Scotland, were the guests at Stockport Accordion Club at Woodley Methodist Church. Their two sets included a wide range of music, some fiddle led and others accordion with midi sounds led. Starting with some typically Scottish dance music, the duo blasted through the ‘Orange Blossom Special’, with Dave’s fiddle seemingly on fire! In contrast Roy’s accordion sound on ‘Ocean’, a tricky waltz composed by France’s world accordion champion Alain Musichini, was great for those who love French café music. There followed ‘Besame Mucho’ and ‘El Choclo’ with exotic Latin sounds, Irish jigs, Italian songs, American hoe down tunes, and some more Scottish tunes. All in all, a lot of variety that went down well with the club's members, finishing with an exciting spot of jazz with ‘Sweet Georgia Brown’, with Dave in Stephane Grappelli mood to round off an evening of excellent entertainment.

Chester Accordion Club is well established. Between them the members have many years of music making. Each year the Club invites a professional in for a concert. This year at the end of October, we hosted a performance by Scottish accordionist Roy Hendrie. He came with his friend, multi instrumentalist Dave Morrice and the pair put on a great show. In some numbers, Dave accompanied Roy; in others Roy accompanied Dave. Together they provided one of the most interesting and varied programmes we have seen in recent years, pleasing even those hardest to please. Their playlist ranged from virtuoso pieces on both accordion and violin, like L’Océan (French musette) and The Orange Blossom Special (aka the fiddle players national anthem) - to standards like O Sole Mio and The Carnival of Venice and Sweet Georgia Brown (a popular choice). There were medleys of Irish and Scottish tunes, too. The virtuoso pieces allowed both musicians to demonstrate what they can do, given a challenge, and their performances were astonishing as well as entertaining – fast and very accurate. In each case Roy and Dave gave a rendition which showed how creative a professional musician can be with a well known tune. There might have been a wrong note somewhere, but if there was nobody noticed it. It was impressive how the two players just got down to business without any fuss. We felt they could have gone on all night (once we’d turned the heating down a bit!) Roy uses an electronic accordion and a sophisticated midi system. The sounds he got out of it were both authentic and appropriate. His version of Besame Mucho, played on a piano setting, made us think a jazz pianist had got in somewhere along the line. The whole set up is very compact but, as he says, his box of tricks more or less enables him to bring a whole Scottish dance band along with him. The sound filled the clubroom without being overloud. My personal favourite of the night was the tango, El Choclo, but that’s only because I’m trying to learn it myself. It was great to see how it should be played and appreciate from the quality of the duo’s performance of it, why it is such a popular number. Roy and Dave’s playlist contains something for everyone. We were in the somewhat unusual situation of having all our members happy at the end of the evening. (Who said you can’t please all of the people all of the time?). The set was drawn from the contents of their latest CD – Coast to Coast – which they are promoting on a mini tour of England. (It’s called coast to coast because the two friends live on either side of Scotland and have to travel a long way to practice together!). If you get the chance to see Roy and Dave, seize it with both hands - but either would be well worth seeing on their own as well. Simon Kensdale - Secretary, Chester Accordion Club

Our october special guest band were the Roy Hendrie Duo. Based in Troon, Roy is a noted bandleader, broadcaster and former U.K. accordion champion and he was accompanied by tremendous fiddler and guitarist Dave Morrice from Aberdeen. The Duo launched into an amazingly varied programme, displaying their mastery of their respective instruments with tremendous arrangements and making the appreciative audience wonder what was next? From traditional marches, Helen Black of Inveran: Mrs H L MacDonald of Dunach: The Cotton Patch Rag: Continental Waltz ; Shetland two Step…and so the music flowed on until all too soon it was time to close the evening with a terrific set of Shetland reels. Musicianship at its best thanks to a fine duo who made a big impression at the Club.

In December 2017 the Renfrew Accordion and Fiddle Club had the pleasure to welcome as our Guest Artistes Roy Hendrie from Troon on accordion and Dave Morrice from Aberdeen on fiddle and guitar. What entertainment they gave us ! We thought we had James Galway guesting when the mellow flute from Roy's magic accordion sounded the opening notes of The Londonderry Air as their opening piece. The Orange Blossom Special was then fired up and Dave leading on fiddle gave it full throttle. We also had Roy leading with Besame Mucho as a jazzy piano rumba with Dave on latin guitar accompaniment. It was a top class performance from both these suberbly versatile musicians - we just didn't know what was coming next. Their final piece The Cotton Patch Rag brought a great hour's worth of wonderful playing from Roy and Dave to a close

As my capacity of President of “Banff Accordion & Fiddle Club” I have heard Roy and Dave on Various appearances at the club . They are both outstanding musicians and as a DUO they are Brilliant and very worthy of the attention of All Clubs and Organisers . Andy Coutts